Mamu is a character from The Legend of Zelda: Link's Awakening. He is an anthropomorphic frog or frog-like being, renowned for his singing ability. His home is located beneath the Signpost Maze.

On his quest to retrieve the seventh Instrument of the Siren, Link navigates his way through the Signpost Maze and finds a stairwell leading to Mamu's abode. Link pays Mamu the price of 300 Rupees for one performance of a "previously unreleased cut" sung by Mamu and his back-up singer frogs. After the performance is finished, Link learns the song, known as the "Frog's Song of Soul", on his Ocarina. The song has the ability to resurrect the dead or awaken the sleeping. He uses this song to awaken the dead Flying Rooster, to enter Eagle's Tower, and to awaken the monster guarding Turtle Rock, permitting entry. Mamu cannot be revisited, as the sign outside his cave states that he and his singing group are on tour. 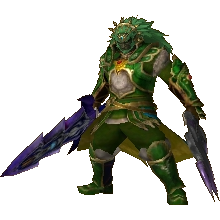 As part of the Link's Awakening DLC, Ganondorf's Standard Outfit (Koholint) is a Mamu Recolor. It can be obtained on the Koholint Island DLC Map. It being used for Ganondorf was most likely a reference to Mamu's role as the main villain in Super Mario Bros. 2 (and to a lesser extent Doki Doki Panic).

Retrieved from "https://zelda.fandom.com/wiki/Mamu?oldid=532446"
Community content is available under CC-BY-SA unless otherwise noted.