This page is about the character. For the boss fight, see Malladus (boss)

"In the beginning, the people followed the spirits of good, and all was peaceful. But that era of peace soon came to an end. The evil Demon King rose to power, destroying everything in his path."
— Prologue

Prior to the events of the game, Malladus ruled over New Hyrule, and the inhabitants of the land lived in fear. Eventually, a rebellion broke out and the Spirits of the land helped the inhabitants defeat Malladus. Despite this, nobody had enough power to kill the being; the Spirits could only muster enough strength and energy to subdue him with chains and shackles and bury him underground. The shackles, extending the land of New Hyrule in four different directions, became the Spirit Tracks, and the surrounding community used these tracks as transportation railways.

During the game, Chancellor Cole separates Princess Zelda's spirit from her body and uses it in order to revive Malladus, as her body is the only vessel suitable for him to inhabit and has the Sacred Power of the Spirits inside of it; if Malladus becomes able to use this power, not even the Spirits of Good would be able to seal him away again. In an attempt to stop him, Link and Zelda ascend the Tower of Spirits, which had been broken apart into segments, and secure the Rail Maps to restore the Spirit Tracks which imprisoned Malladus. However, at the midway point in the game, Cole succeeds in reviving Malladus, who then takes possession of Zelda's body, but finds adjusting to it to be quite difficult. Byrne, a servant of Cole, demands Malladus give him the power he was promised for helping to set him free, but Malladus refuses due to Byrne's previous affiliation with the Spirits. Immediately afterward, Cole and Malladus use the Demon Train to escape to the Dark Realm. In the hopes that Malladus doesn't adjust to Zelda's body immediately, Link and Zelda search for the Bow of Light as a means to force Malladus out of Zelda's body and the Compass of Light to find him in the Dark Realm (revealed to them by Byrne who had become good after his rejection by Malladus).

Upon finding the two artifacts, Link and Zelda enter the Dark Realm and find the Demon Train. After a short battle, Link and Zelda, in a Phantom's body confront Chancellor Cole and gets past his defenses. Zelda then grabs Malladus, allowing Link to shoot him with a Light Arrow. The Demon Train is destroyed and the contenders are returned to somewhere nearby the Tower of Spirits. Malladus is then forced out of Zelda's body and tries to reclaim it, but Zelda gets to it first with help from Byrne, who conjures a magical barrier. In vengeance, Malladus promptly destroys Byrne with a surge of dark magic. Malladus then consumes Chancellor Cole and possesses his body, transforming it into a giant beast. Due to the incompatibility of Cole's body, Malladus' hold on the vessel begins to slip. Determined to destroy the world, Malladus attempts one last destructive attack, but the crystal embedded in his forehead is stabbed by Link and Zelda with the Lokomo Sword, causing it to shatter. With the destruction of the crystal, light begins to shine from within Malladus' body, marking the permanent destruction of Malladus along with Chancellor Cole.

According to the Hyrule Historia, an alternate, darker death sequence was planned for Malladus in which his severed head would have struggled to plead for mercy. This was removed from the final game, as the developers felt that it invoked too much sympathy for Malladus.

Malladus' name is possibly based on the famous British steam locomotive Mallard (LNER A4 class 4468), well-known for holding the World speed record for steam locomotives of 126.5 miles per hour. This seems probable due to the fact that many characters in Spirit Tracks are named in relation to trains. That particular locomotive may have been chosen due to both its fame, and because its name somewhat sounds like "malady". Furthermore, the European localisation for Malladus' name is in fact "Mallard". 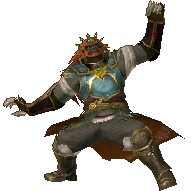 As part of the Phantom Hourglass & Spirit Tracks, Ganondorf's Standard Armor (Grand Travels) is a Malladus Recolor. It can be obtained on the Grand Travels DLC Map.

"More than 100 years ago, the Demon King was defeated by the spirits of good and imprisoned in the Tower of Spirits. Chancellor Cole and Byrne extract Zelda's spirit, planning to use her body to revive Malladus. Can she do anything but watch events unfold?"
— Trophy Description

Malladus appears as a trophy.

Chancellor Cole under the possession of Malladus

Malladus is destroyed in an explosion of light

The weak spot on Malladus's back

Link and Princess Zelda forcing the Lokomo Sword into Malladus' head
Add a photo to this gallery
Retrieved from "https://zelda.fandom.com/wiki/Malladus?oldid=540731"
Community content is available under CC-BY-SA unless otherwise noted.