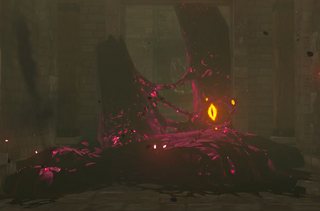 Malice is a thick, black-and-magenta tar-like substance that can be found in several locations throughout Hyrule Kingdom. Malice can damage Link upon contact. Malice is typically found in large pools on the ground, but can also cling to the sides of rocks and buildings. Large concentrations of Malice sometimes include large, blunt, slightly curved spikes that impede attempts to pass above them. Some pools of Malice have a glowing eyeball which, when destroyed, cause a large chunk of Malice to dissipate.[2] Inside the Divine Beasts and Hyrule Castle, Malice may also have a mouth that is able to release Cursed Bokoblins, Cursed Moblins, and Cursed Lizalfos. These Enemies will continue to spawn and attack Link until its corresponding Eye of Malice is destroyed, should there be one.

At the top of Mount Lanayru, Link can find Naydra covered in Malice.[1] In order to free the Dragon, he must destroy all the glowing eyeballs around its body. During the final battle with Dark Beast Ganon, the remaining Malice surrounds Ganon and converts him into his original form.[3]

Malice is set to reappear in the Sequel to Breath of the Wild, about to consume a Rat, and is fighting with Link's glowing hand over the Ganondorf mummy.

In the second trailer shown in E3 2021, the Malice is shown to be able to cling onto Link's arm, causing him to lose the Master Sword. Later in the trailer, it is also shown that a large mass of malice is concentrated underneath Hyrule Castle causing the castle to move upwards towards the sky.

Malice first appears as a substance in the Scenario "Freeing Korok Forest," where it blocks the path to Korok Forest. In this Scenario, the Malice had to be destroyed by defeating the Hollows of each of the Champions, but in most cases, the Eye of Malice needs to be defeated with a weapon in order to destroy the Malice swamp. Unlike in Breath of the Wild, Malice is not poisonous - it only serves as a obstacle to block the character's path.