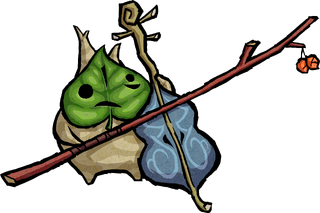 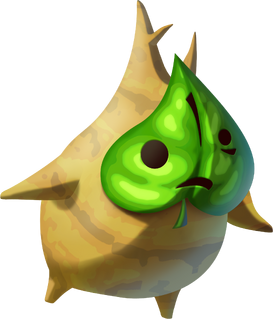 Makar is a character in The Wind Waker.[2]

Makar is a Korok from the Forest Haven. Under the care of the Great Deku Tree, considered a father figure to the child of the forest, Makar holds a special position among the Koroks as their only musician and performs for them regularly. Makar's musical forte is the violin, which might seem at first to be a cello due to Makar's height. He primarily plays at the ceremony that takes place annually around the time Link first arrives at the Forest Haven to retrieve Farore's Pearl, although he and his friend Linder are always late according to the Great Deku Tree.[3] Before the Koroks can perform the ceremony for Link, Linder flies in and informs the Great Deku Tree that Makar flew over the nearby Forbidden Woods and fell into the area, despite the Great Deku Tree's warning that it had become overrun with monsters.[4] This delays the ceremony and requires Link to go to the Forbidden Woods to rescue him. Just when Link finds Makar, the Korok is eaten by Kalle Demos. Link defeats the monster and the two return to Forest Haven. The Great Deku Tree is glad to see him safe, but Makar begins to cry and apologizes.[5] The Great Deku Tree forgives him,[6] and tells Makar to play his violin.[7] Makar plays for the ceremony, causing great seeds to grow from the Great Deku Tree.[8] While the other Koroks take the seeds across the Great Sea,[9] Makar and Hollo remain in the forest.[10] Makar composes a new tune annually for the ceremony and practices it behind the waterfall at Forest Haven so that the others will not hear, though his music is actually audible from his hiding place.[11] It is by following the sound of his music that Link is able to find Makar later in his quest.

Makar is later revealed as the Sage of Wind and successor to Fado the Kokiri.[12] The mark of this is in his violin which is identical to Fado's and is known as an "instrument of fate." After completing the Earth Temple, Link returns to the Forest Haven looking for the new Wind Sage. He finds Makar playing this violin, alerting him to the Korok's destiny. Link conducts the "Wind God's Aria" for Makar, causing the Korok to see Fado and awaken as the Wind Sage. Now knowing his purpose, Makar accompanies Link to the Wind Temple.[13] He is quickly captured again and waits in a cage for Link to free him. In the final chamber of the temple, after Link defeats Molgera, Makar plays the Wind God's Aria and restores the power of the Master Sword, giving it the ability to strike down Ganondorf.[14] He stays behind in the Wind Temple to continue praying for the Sword while Link goes on to defeat Ganondorf.[15] When Link and Tetra resurface after Hyrule is flooded once more, Makar can be seen with Medli and Tetra's Pirate Crew on her Ship.

Makar has several useful abilities that Link can use by conducting the "Command Melody." Like all other Koroks, Makar can fly with the propeller in his back. This can only be used for a short time, however, and he will fall if he uses it for too long. Makar can also plant seeds in mounds of soft soil, causing trees to grow. This can make Treasure Chests appear, unlock doors, or open other paths that were not previously accessible. These trees can also be used as targets of the Hookshot, allowing Link to cross gaps and climb to new places. Finally, if Link conducts the "Wind God's Aria" near a wind altar, Makar will play the song and cause the stone to break, revealing a new door or passage.

Makar appears as a Sticker in Super Smash Bros. Brawl.

Makar's name is derived from the Makoré plant. In Scotland, a Makar is also a type of bard that plays music in the royal court, fitting his skill with the violin and how he's one of the Sages.