Zelda Wiki
Register
Don't have an account?
Sign In
Advertisement
in: Items, Breath of the Wild Pages with Invalid or Missing Terms, Masks,
and 20 more
English

This article is about the item and antagonist. For the game, see The Legend of Zelda: Majora's Mask. For other uses, see Majora's Mask (Disambiguation). 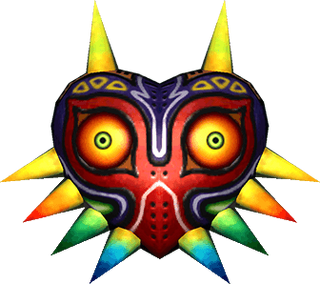 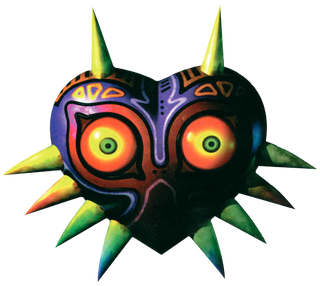 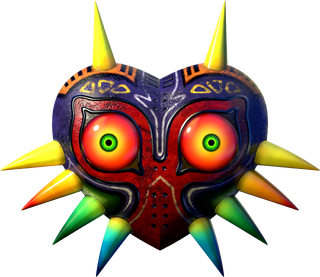 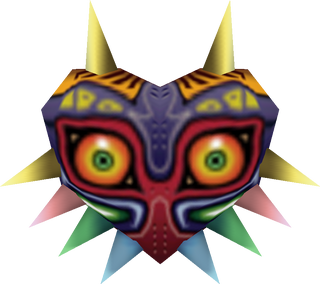 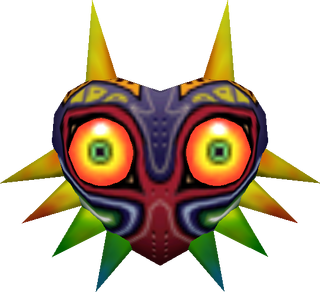 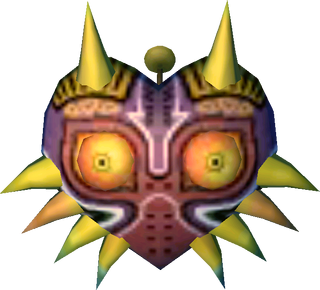 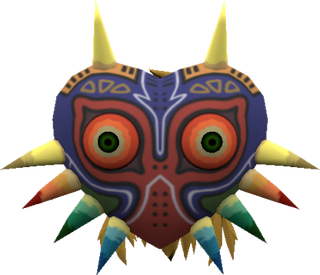 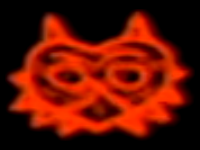 Majora's Mask
A Link Between Worlds
Breath of the Wild

Breath of the Wild
50 Rupees

Breath of the Wild
15 Rupees

Breath of the Wild
1

Majora's Mask is a recurring Item, Object, and Boss in The Legend of Zelda series.[2][3] Majora's Mask goes unnamed in A Link Between Worlds.

When the Skull Kid donned Majora's Mask, it transformed a world into the land of Termina out of a combination of the evil within the Mask and the Skull Kid's memories and delusions.[5]

For the vast majority of the game, the Majora's Mask is worn by Skull Kid on the Clock Tower, drawing the Moon to Termina.[6] Although the Skull Kid is unaware, Majora's Mask is gradually beginning to take complete control of his mind, with his once harmless pranks becoming malicious acts of pure evil.[7] Prior to the game's events, Skull Kid used the power of Majora's Mask to prank and curse others around him, such as Kafei.[8]

After the Guardian Deities are called, Majora's Mask abandons Skull Kid and enters the Moon so that it can push it through the Guardian Deities' blockade and complete its destructive path.[9][10] Link then proceeds to follow Majora's Mask into the Moon.[11] Once inside, he finds four Moon Children wearing the Boss remains and one lonely child under a Tree wearing Majora's Mask itself. If Link gives all his non-transformation Masks to the four children, the child wearing Majora's Mask will give him the Fierce Deity's Mask. He will then take Link to the Final Boss room. It will come in three increasingly powerful forms.

When the final battle starts, Majora's Mask, as its standard appearance, comes to life and grows hairlike tentacles. To defeat it, Link must first stun it with any projectile by hitting it in the back. This will make it collapse to the ground, allowing Link to strike it with his Sword. Alternatively, Link can transform into Zora Link and use his Boomerang fins. When Targeting the Mask, the fins will fly behind it, hitting its back. Additionally, Deku Link can burrow into the flower designs on the ground, protecting him from any attack. This also allows Deku Link to hit the Mask as it flies over him. After Majora's Mask has taken enough damage, the four Boss Remains will begin to attack Link as well, shooting energy balls at him. They can be defeated by shooting Arrows at them. Majora's Mask will also start shooting fire beams at Link, which can be reflected back with the Mirror Shield. Majora's Mask also uses its tentacles to perform a whirling attack. The attack cannot be blocked, but it can be countered with a Spin Attack, causing Majora's Mask to become stunned.

After the Mask form is defeated, it loses its tentacles and grows a set of arms and legs, as well as a tiny, one-eyed head with horns. It also gains a young, feminine voice. This form of Majora's Mask will run very quickly around the room, pausing every now and then to perform a variety of dances, including the moonwalk, Kozachok, pirouettes, and jumping jacks or to make taunting gestures at Link. Its only attack is a sudden rapid-fire barrage of energy bolts it fires from its hands. To defeat Majora's Incarnation, Link must hit it with either his Sword or Hero's Bow when it stops dancing. When hit, it will fall to the ground on its face and flail about. After being struck a few times with the Sword, it will get up again in pain. During this part of the battle, Majora's Incarnation makes humorous clucking and whooping noises, and emits a high-pitched screech whenever struck.

After the final painful scream from Majora's Incarnation is heard, it stands up to assume its final form. Its muscles then begin to throb and inflate into a more humanoid shape. Whip-like tentacles also shoot out from its hands, and a new head bursts forth from its neck, becoming Majora's Wrath. To defeat Majora's Wrath, Link must use a projectile weapon to stun it while it is immobile. He can then strike it with a Light Arrow or his Sword. It often jumps from one side of the arena to the other. Its attacks are fast-hitting, but slow to wind up, giving Link a window of opportunity to attack. Majora's Wrath attacks by whipping its tentacles three times, throwing giant spinning tops lined with spikes, grabbing Link and tossing him across the room, and using a furious whipping attack with an accompanying shriek. Most of Majora's Wrath's attacks have a very long reach which allows it to attack numerous times in succession and can be difficult to dodge. Defeating Majora's Wrath causes the monster to disintegrate into ashes, winning Link the battle and ending the game.

In Breath of the Wild, Majora's Mask appears as Armor in The Master Trials DLC Pack. Obtaining Majora's Mask is the objective of the Side Quest "EX Treasure: Ancient Mask". Majora's Mask is mentioned in Misko's EX Journal in the Outpost Ruins, while Majora's Mask itself is hidden in a Treasure Chest at the Kolomo Garrison Ruins. After obtaining the Mask, Granté will begin selling it for 50 Rupees.[note 1] The Mask only offers 1 defense, but allows Link to approach multiple enemies, including Bokoblins, Moblins, and Lizalfos without provoking them to attack.[3] Lynels are also affected in this manner, but will attack after a short amount of time. As a result, it basically has the power of Kilton's Bokoblin Mask, Moblin Mask, Lizalfos Mask, and Lynel Mask disguises all roled into one.

In an extra chapter of the Majora's Mask manga by Akira Himekawa it is explained that before the time setting of Majora's Mask, there was an evil creature which fed on the desires of humans who had come to try and claim its armor and be granted their wishes. A traveler then comes forward to the place where the monster lived and starts talking with the creature, where he finds that the monster itself wanted to die, being so miserable. The man then proceeded to pull out his bongo and started playing. The monster went into a trance and started dancing. The traveler played for three days straight, and on the third day, the beast dropped dead from dancing. The traveler then took its magical armor, but instead of wishing upon it, he carved it into a Mask in an attempt to seal the beast's power inside the Mask forever. The Mask was named Majora after the beast. The Mask had a spirit because Majora's evil power lingered on inside the Mask seeking a host, not resting until its wish was granted.

In Super Smash Bros. Melee, Majora's Mask serves as a stage for Event 47, "Trophy Tussle 3." If all three opponents are defeated within three minutes and without losing the 2 lives granted, the player is rewarded with the Majora's Mask Trophy.

In Super Smash Bros. for Nintendo 3DS / Wii U, Skull Kid wearing the Majora's Mask appears as an Assist Trophy. When summoned, he flips the stage upside-down, inverting the direction of the Fighters' movements. A Trophy of the Skull Kid wearing the Majora's Mask and another Trophy of the Mask itself can be bought from the Trophy Shop. In Super Smash Bros. for Wii U, Majora's Mask appears as an item in Smash Tour, inflicting 50% of damage to the user while doubling its stats.

"Mujura," the Japanese name for Majora, was created by Takaya Imamura, designer of the Mask and art director for the original game. He created the word by combining Imamura, his last name, with Jumanji.[19]