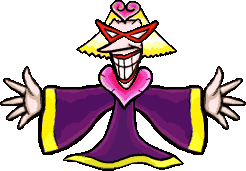 Majiyo is the queen of the Tonalin Kingdom, Emerald City's neighboring country, and mother of Segāre. Her goal is to collect a magical energy called Feropon. This energy is produced by the delusion of a man falling in love for a woman, and is the source of her youth, as well as her magical powers. Because Tingle is a 35 years-old bachelor, he is the perfect vessel to produce Feropon.

She appears at the beginning of the game in a television commercial, where she sells Tingle a mysterious book that contains the world where the game takes place. In the final moments of the story, in the royal dance, Majiyo fooled everyone by disguising herself as the Princess, with the purpose of getting the Feropon that Tingle has harvest through the game, without he even knowing. Thanks to Buriki, Lion, and Kakashi, who appears with the real Princess, Majiyo’s true identity is exposed, however, she quickly use her magic to kidnap the Princess and teleports to other dimension, where the final battle begins.

At the start of the battle, Majiyo grows to a giant size, causing Tingle and his friends to jump onto Lion's back and give chase. Buriki identifies the heart atop Majiyo's head as her weak point. To damage her, Tingle must shoot the top of her head with his Slingshot. First, she will summon some mosquito-like monsters that will drain Tingle's life meter. Afterwards, Majiyo summons a massive caterpillar that chases after the group. To defeat it, Tingle must shoot constantly at its lips until the creature is destroyed, allowing Tingle and his team to resume the chase.

Once enough damage has been dealt to Majiyo, she summons a giant snake. Lion will run alongside it while Tingle shoots its head and the frogs it shoots out of its back. If Tingle fails to defeat the frogs before they reach him, they suck out his health through a kiss. Once the creature is defeated, the battle continues the same way as the first round until her defeat.

Just as it seems that she is defeated, Majiyo reappears in a demonic form. She takes the form of a gigantic floating head, surrounded by six rotating hands that summon cards. These cards will have one of two characters in them, either Majiyo, who must be attacked, or the Princess, who must not be attacked. Her weak point is the heart on top of her head once again. As the fight goes on, the number of cards that appear will increase, and the speed of the rotating hands will also increase. Once the heart has been hit enough times, it will shatter, revealing Majiyo's inside the heart. Once Tingle shoots her, the fight is over.