Zelda Wiki
Register
Don't have an account?
Sign In
Advertisement
in: Objects, Portals, Objects in A Link to the Past, Objects in Ancient Stone Tablets 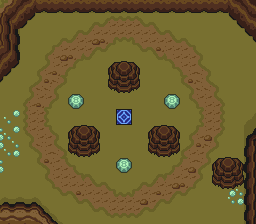 The Warp Tile near Spectacle Rock

Transportation to the Dark World

Moon Gate
Pedestal of Time
Magical Warp Tile,[1] or simply Warp Tiles (and also known as Magical Transporters), are mysterious portals that transport anyone who steps into them to the Dark World. There are eight of them in all.[2] Due to the efforts of Agahnim in sending the Maidens to the Dark World, he also manages to open a similar portal to the Dark World at the gateway to Hyrule Castle.

Most are hidden underneath rocks, but the one at the peak of Death Mountain is open and easily stumbled into. Those who walk through these portals are transformed into a shape that reflects their heart by the power of the Triforce. This is usually that of a monster or animal.[3] Not only this, but these warps are one-way; there is no way for normal people to return from the Dark World due to the seal of the Seven Sages. Only Link is able to return, using the Magic Mirror. By using the Magic Mirror, Link will leave behind a sparkling gate at his return location that will allow him to transport back to the Dark World.

The eight Magical Warp Tiles found across Hyrule are:

In addition to the above Magical Warp Tiles, Link can also Warp to the Dark World by walking through the gateway at Hyrule Castle after he first defeats Agahnim and is sent to the Dark World.

To retain his normal form after passing through a Magical Warp Tile, Link will have to obtain the Moon Pearl.

Portals in The Legend of Zelda series
Community content is available under GNU Free Documentation License unless otherwise noted.
Advertisement