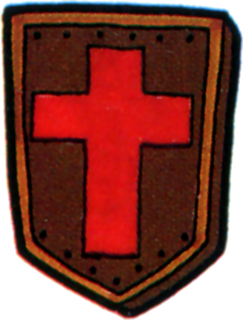 The Legend of Zelda
The Adventure of Link

In The Legend of Zelda, the Magical Shield is a defensive item that Link can purchase from various shops around Hyrule at a cost of between 90 and 160 Rupees, depending on which shop he buys it from.

Unlike the basic Wooden Shield, it is capable of blocking not only arrows and rocks, but also most fireball and magical attacks as well as the Lynel's projectile sword attack. However, it cannot block a boss's fireballs. If a Like Like happens to devour Link's magical shield, he will revert back to using his standard shield and another Magical Shield would have to be purchased from a shop.

Link starts out with the Magical Shield in The Adventure of Link. It can block most attacks from enemies, except those from Dairas. Unlike other Zelda games, Link cannot upgrade the Magical Shield; however, by using the Reflect Spell, the shield will be capable of reflecting Wizzrobes' magic attacks.

Other than using it to protect himself and others, the young hero uses the Magical Shield as a skateboard of sorts in two occasions. In "Underworld Connections", Link hops on the shield and uses it to surf through the fire to get Zelda and him out of the Underworld. Moreover, in "Hitch in the Works", Link throws a bomb in front of him and gets out his Magical Shield. He then rides on it like a skateboard and uses the bomb's explosion to launch himself out of the castle to catch up with the Moblins who have taken Princess Zelda.

The Magical Shield returns in Captain N: The Game Master. Link is seen wielding the shield more often than in the Zelda animated series, using it to defend himself. In "Quest for the Potion of Power", the Magical Shield is used to defeat the resurrected Ganon: Kevin pours the contents of a Bottle of Magic onto Link's shield, which allows him to use the Reflect Spell when Ganon shoots a firebeam at the young hero. When the beam hits the Magical Shield, it bounces back at the evil wizard, defeating him.

The Magic Shield appears as the sole Shield in Zelda's Adventure. It is purchased from the shop in the Forest of Ogbam for 500 Rupees. The Shield allows Zelda to block most projectile attacks, provided if she is standing still and facing the direction of the oncoming attack.

The Magical Shield is one of Link's shields in Soulcalibur II, although it is known as the Magic Shield instead and does not resemble its original appearance. Paired off with the Magical Sword, the Magic Shield can be bought in the Aldebaran Shop, Algol Shop, Pollux Shop, or the Merak Shop for 3000 Gold while playing the Weapon Master Mode. Although Link's offense and defense will not increase when he equips these weapons, the Magic Sword will cause 40% block damage, compared to the usual 10%.[2] The game also mentions that since the shield is quite old, it is weak against physical impacts.