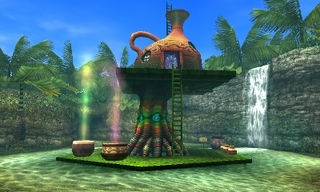 Owned by the sorceress sisters Koume and Kotake, it is located in the Southern Swamp. It opens from 6 AM to 6 PM,[2] or all day in Majora's Mask 3D. At first, Kotake will only have the Red and Green Potions for sale, but if Link brings her a Mushroom, she will be able to make and start selling the Blue Potion.[3]

The shop itself is shaped like a giant kettle, painted red and suspended on a high platform above a small lake. Kotake generally serves customers in the shop while Koume gathers ingredients, such as Mushrooms, in other areas of the swamp.[4] During the three days that Link repeats in Termina, Koume is attacked by the Skull Kid and is immobilized in the Woods of Mystery.[5] If Link encounters her, he can report her status to Kotake in return for a Red Potion,[6] which he then can use to revitalize Koume. However, if Link does not rescue the hag before a certain time, Kotake will enter the woods on her broomstick in order to locate her missing sister, and Link will be unable to purchase Potions from the shop.