Zelda Wiki
Register
Don't have an account?
Sign In
Advertisement
in: Items, Items in A Link to the Past, Items in Four Swords Adventures,
and 2 more 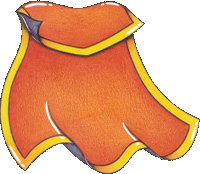 The Wand of Gamelon
Cadence of Hyrule

Becoming invisible
The Magic Cape is a recurring Item in The Legend of Zelda series.[1][2][name reference needed]

The Cape can be found under one of the graves in the Graveyard north of Hyrule Castle. The only way Link can get into the cave is by performing a Dash Attack into the grave surrounded by dark colored rocks. The dark rocks can only be lifted using the Titan's Mitt, though the young hero can bypass them entirely by using the Magic Mirror to reach the inner part from the Dark World.

When wearing the Magic Cape, Link becomes invisible, being able to pass through enemies and spikes without receiving any damage. However, the cape requires a high amount of Magic Energy in order to be used. The Magic Cape is necessary to gain access to one Piece of Heart by walking through a bumper on Death Moutain.

In The Wand of Gamelon, the Shroud and Magic Cape appear as related items. The Shroud is received from Lubonga of Aru Ainu, and is used to defeat Gibdo in a single shot. The Magic Cape is the upgraded form of the Shroud, which allows Zelda to jump higher and at longer distances at the cost of 5 Rubies per use. The Magic Cape is obtained by giving an Arpagos Feather to Myra in Hanyu Forest, which she uses to combine with the Shroud.

Another similarly named item, the Magic Cloak, also appears in The Wand of Gamelon. It functions similarly to the Magic Cape from A Link to the Past, as Zelda can wear it to temporarily become invisible and walk past enemies at the cost of 20 Rubies per use. It is the upgrade to the Cloak that Zelda receives from Lika in Sakado. She will offer to turn it into the Magic Cloak if Zelda brings her some Fairy Dust.