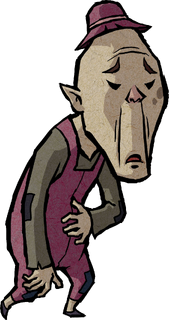 Maggie's Father is a character in The Wind Waker.[2]

Maggie's Father can be seen in Windfall Island begging to anyone who passes by to rescue his Maggie from the Forsaken Fortress.[3] Upon Maggie's return, thanks to Maggie bringing back Skull Necklaces, he and Maggie become filthy rich.[4][5] He goes through a complete change in personality after his daughter is freed and once they become wealthy. Originally, he seemed very timid and nice, but after becoming rich, he became extremely selfish and loathsome. Even though his personality had changed, he still protects his daughter as can be seen when he kicks out the Rito postman Ilari for trying to deliver a love letter from a Moblin.[6][7] If Link gives Maggie's Father 20 Skull Necklaces, he'll give Link a Treasure Chart.[8]