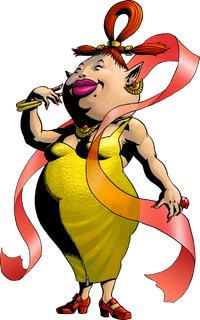 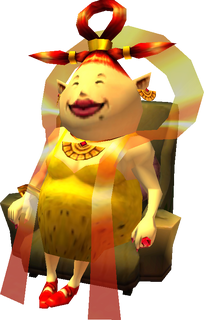 Madame Aroma is a character in Majora's Mask.[3][note 1]

Madame Aroma is the wife of Mayor Dotour and the mother of Kafei. Since Kafei's disappearance, she has been trying to locate him.[5] She is in charge of the activities taking place during the Carnival of Time and is busy working with Toto and Gorman for the majority of the three day period.[6] She hires Link to investigate the disappearance of her son and gives him the Kafei's Mask, which she made herself,[7] so that he is able to question townspeople regarding Kafei's whereabouts.[8] To receive the mask, Link must visit her in the Mayor's Official Residence any time after 10:00 AM on the First or Second Day.

During the Reuniting Kafei and Anju sidequest, Link receives the Special Delivery to Mama from the Postman, which most be delivered to Madame Aroma in the Milk Bar after 6 PM. By wearing Kafei's Mask, Link can hand over the letter to her, who in return will reward Link with a Bottle full of Chateau Romani. In Majora's Mask 3D, giving her the letter again will result in her giving him a Fishing Hole Pass. She is last seen attending her son's wedding during the ending credits.