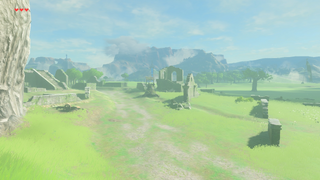 The Mabe Village Ruins are a location in Breath of the Wild.[1]

The Mabe Village Ruins are where the thief, Misko, hid an article of treasure after stealing it from Hyrule Castle. Link can learn the whereabouts of this treasure by reading Misko's EX Journal in the Outpost Ruins. According to the Journal, Misko hid the treasure in the Ruins near farmland where many people once gathered, referring to the Ranch Ruins.[2] The metallic Treasure Chest containing Tingle's Tights can be found embedded in the ground underneath the remains of a Guardian at the southern part of the Ruins. In order to retrieve the Chest, Link must use the Magnesis Rune.

A Korok can be found hiding underneath a Rock at the peak of a rock formation on the eastern side of the Village Ruins. He will give Link a Korok Seed for finding him.[3]