Zelda Wiki
Register
Don't have an account?
Sign In
Advertisement
in: Locations in Oracle of Ages, Labrynna, Villages, Locations 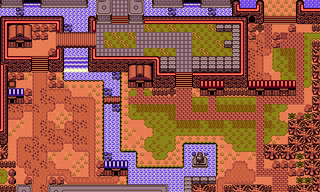 Lynna Village is a location in Oracle of Ages.[1]

On his adventures between time and space, Link also visits Lynna City centuries in the past, during the reign of Queen Ambi. The smaller, simpler village is composed of wood houses with thatched roofs. The dreary mood of the hard-working inhabitants is worsened when all the men in the village are sent to work on the Black Tower during the day by the orders of Queen Ambi,[2][3][4] who was influenced and later possessed by Veran, Sorceress of Shadows. Veran, while in Nayru's body, created a day that never ends, forcing the villagers to work indefinitely on the tower.[5][6]

Lynna Village is the seat of the Labrynnian monarchy, reigned by Queen Ambi, who resides in her palace which is connected to the village. The palace is so large that it is almost equal in size to the village itself.[7]

Despite there being four hundred years between the past and the present ages,[8] Lynna Village greatly resembles Lynna City. The Maku Tree can still be found northeast of the village (although she is a mere sapling at the time), and an Ember Seed Tree still stands south of the village (although South Lynna is simply part of the South Shore in the past). New areas appear on the map, such as Northeast Lynna and West Lynna.

Many of the homes seen in this past age are at the very same location as the homes in the present, although they are inhabited by different people:

Once Link defeats Veran atop the Black Tower, peace returns to the village and all of Labrynna.[10] Afterwards, Link is treated with utmost respect by the inhabitants of Lynna.[11] Statues of Link are placed within the village,[12] which can be seen in the present age as well.