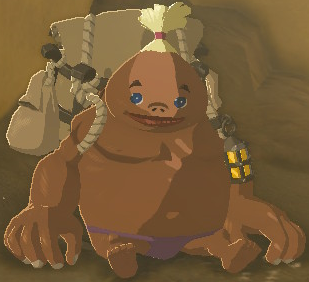 Lyndae is a character in Breath of the Wild.[2]

Lyndae is a Goron who can be found in Gerudo Town. Lyndae is allowed into Gerudo Town despite being a man.[1] If Link speaks to Lyndae during the day, he incorrectly pronounces Sav'otta as "Sabotta", which is a Gerudo greeting meaning "good morning".[3] Lyndae explains that one must really bite their lip to get the "V" sound out clearly and is ashamed that a little kid made fun of him for his pronunciation yesterday.[4][5] He feels that it sounds the same no matter what he does.[6] If Link speaks to Lyndae at night, he struggles to say "sav'saaba," which is the Gerudo word for "good evening."[7] Lyndae feels that Gerudo words are hard to remember.[8] He also comments that Gerudo Town truly is full of women and that it smells nice there.[9][10] Lyndae wonders why he was allowed into the Town when men are not allowed inside.[1] This implies that the Gorons are all male race as no notable female members have appeared and they all refer to each other as brother.

After Link calms the Divine Beast Vah Naboris, Lyndae can be found sitting with the Goron Strade. When Link speaks to him here, Lyndae finally pronounces "sav'otta" correctly.[11] However, he still struggles with pronouncing "sav'saaba," instead saying "sav'saava" and "sab'saava."[12] Lyndae also expresses how shy he felt being surrounded by girls before Strade came to Gerudo Town.[13] However, Lyndae admits that he still feels shy around Strade.[14]