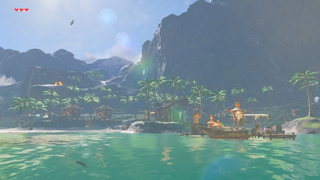 Lurelin Village is a location in Breath of the Wild.[1]

Lurelin Village is located in East Necluda. It is a seaside village located on the coast bordering the Faron and Necluda provinces which overlap though the Sheikah Slate Album indicates Lurelin Village is primarily located within East Necluda. It is surrounded by tropical palm trees and steep cliffs that overshadow it. The architecture here consists of simple wooden huts. The inhabitants of this village are Hylians with dark skin and many make a living as humble fishermen, though they also raise Hateno Cows though their economy is primarily geared towards fishing.

Rozel is apparently the village elder as he is an seasoned fisherman who has retired due to his old age and spends his days standing at the pier with the Raft in the village, though takes refuge in the hut he shares with Numar when it rains and sleeps in his hut at night. He will tell Link about various points of interest in and around the village. During his travels Link encounters people originally from Lurelin Village such as Rozel's daughter Ralera who moved to Hateno Village after marrying her husband Rhodes, a miller from Hateno Village. Rozel is happy to hear from Link she is doing well, as he misses her. Link also encounters a treasure hunter named Regan who left Lurelin Village in order to seek his fortune inland by scavenging ruined carts in various places across Hyrule such as Atun Valley though can also be encountered in certain areas of Hyrule Field, refusing to return to the village until he strikes it rich so he can return to rub his fortune in the other villager's faces, though often has to be rescued from monsters as he foolishly travels around without weapons or a shield. Hailing from Lurelin Village the traveling merchant Chumin travels with his beloved Donkey back and forth from Lurelin Village to Sarjon Woods selling fruit and seafood that come straight from Lurelin Village.

Kiana and her husband Sebasto live in the village with their two children Kinov and Zuta in two huts with a Cooking Pot in-between them. Zuta will show Link the way to Palmorae Ruins where he can find Garini a young villager who often goes to the ruins to poke around even when it rains according to Rozel. If Link has obtained the Camera Rune and speaks Garini he can take part in the Shrine Quest "A Fragmented Monument". Link can speak to Kiana during the day to take on the Side Quest "What's for Dinner?" in which she asks Link to get her a Hearty Blueshell Snail and Goat Butter which she needs to make Seafood Paella and will reward him with some once it is completed.

The Gerudo Flavi came to the seaside village all the way from Gerudo Town in search treasure and has taken an interest in Eventide Island in the Necluda Sea east of the village. Rozel will tell Link about Eventide Island and is impressed if Link mentions he'd been there.

Like most villages, it has a statue of Hylia on the beach on the westside of the Inn. There is also a Treasure Chest Shop in the village run by Cloyne. Numar and Armes are known to sometimes gamble there and it is implied that gambling is a pastime among the village's fisherman, though some like Numar have developed a gambling habit which may leave them broke as he often borrows money from people promising to reimburse them if he wins. Rozel who lives with Numar warns Link not to gamble too much though notes that a little gambling is okay but one should know when to quit. Mubs runs the Lurelin Fish Market on a pier south of the village's Inn which is run by Chessica. The Yah Rin Shrine sits on a small plateau that overlooks the village and acts as a fast travel point once its Travel Gate has been added to the Sheikah Slate.

Most of the village's huts are built around palm trees presumably to give them extra stability as the village is occasionally beset by tropical storms. The Treasure Chest Shop and Inn also feature a boat-like design and are much larger.

Tuft Mountain located west of the village is a popular tourist destination especially among people looking for love as the heart-shaped pond on the mountain known as Lover's Pond is said to be a place where one can meet their soul mate. The pond is famous among the Gerudo as Ashai has a map picture depicting the pond on the chalkboard in her classroom in Gerudo Town. Traysi wrote her first Rumor Mill article about Lover's Pond which can be found at Enchanted in Kakariko Village. Numar even notes people climbing up Tuft Mountain and wonders if any of them have found love there indicating the legend of Lover's Pond is well known among the villagers. However some people mistake broken heart-shaped pond on Ebon Mountain near Hateno Village for Lover's Pond. The main road that lead in and out of the village lead into Atun Valley. While the road is one of the safest ways to reach the village, there are some dangers in and around it such as a monster camp on a cliff north of the Yah Rin Shrine and Bokoblins sometimes attack people along the road like Regan, though it is generally safe if one follows the road.

Seagulls fly in the skies over the village who the local fisherman have learned to use their tenancy of flocking over certain places as an indicator of where to find fish and in rare cases sunken treasure. The lookout platform in the village is a great place to take a picture of a Seagull to add it to the Hyrule Compendium or to hunt them for Raw Bird Drumstick. Ironshell Crabs and Razorclaw Crabs can be found throughout the village's beaches and under rocks. Hearty Lizards can be found crawling on palm trees or on the ground. Small schools of Porgy can be found in the village harbor which Link can fish for himself, though they are also sold at the town's fish market. Hearty Blueshell Snails can be sometimes found along the towns shoreline such as the shore south of the inn. Hearty Truffles grow under Rozel's hut while Endura Shrooms grow under the hut Kiana and Sebasto sleep in (and where their Hylian Retriever stays at night). Palm Fruit grow on Palm Trees in the village and can sometimes be found on the ground. The village Goddess Statue is located near the inn for both travelers and villagers to pray to Hylia.

Like most places in Hyrule, Link can find hidden Koroks in and around the village who will reward him with a Korok Seed if he finds them.

It is suggested Lurelin Village has relations with Hateno Village due to them having a history of fishing in Hateno Bay and Zora's Domain via the Lanayru Sea presumably providing them both with seafood and Porgy they catch as Hateno Villagers are farmers and Hyrulean Zora generally prefer to live and fish in freshwater even though they can tolerate saltwater.

Mubs runs the unnamed open-air Fish Market on the largest pier in Lurelin Village which acts as the town's general store that sells Porgy and Ironshell Crabs caught by the village fisherman as well as Octo Balloons the fisherman obtained from defeated Water Octoroks. In addition to items obtained from the sea, the market also sells Arrows and Shock Arrows to travelers and possibly the village's fisherman as they would be useful combating monsters and can be used for bowfishing. Link can also sell Armor, materials, and food dishes to Mubs for Rupees like most shops. A fishing boat can be found docked next to the market's pier though it cannot be used by Link and the Porgy hanging from it are purely cosmetic.

Chessica runs the Fishing Resort, a seaside resort which offers normal Bed for 20 Rupees and or a fluffy bed for 40 Rupees. Chessica also offers free use of the Raft tied to the pier Rozel stands on as a treat to patrons (however Link does not have to stay at the Inn to use the Raft). As the Raft is located next to a pier it is one of the few places Link can horse step a Horse onto a Raft which he can use to transport his horse to Tenoko Island or Eventide Island.

As she is originally from Gerudo Village, the Gerudo Flavi sleeps at the inn at night and takes shelter under one of the umbrellas just outside the Inn. Link also may encounter travelers like Letty occasionally resting at the inn before moving on. Chumin rests under a tree near the Inn with his Donkey when he comes back to the village.

Lurelin Village was spared the destruction of the Great Calamity.[2] According to one of the Zora Stone Monuments, during the Age of Burning Fields the waters near Lurelin Village was once plagued by a giant Water Octorok which terrorized the village fisherman. The Zora Prince Sidon, younger brother of the late Zora Champion Princess Mipha and son of King Dorephan heard of the village's plight and left Zora's Domain to deal with the beast. The Octorok was said to be as large as a mountain and had swallowed many would be heroes. It appeared Prince Sidon himself would meet this gruesome fate too when he was swallowed by the beast, but he managed to kill the beast by attacking it from the inside with his spear, killing the beast and ending the threat it posed to Lurelin Village. As a result, Lurelin Village survives and is peaceful one hundred years after the Great Calamity and there are no signs of any giant Octorok. The story of Prince Sidon's heroism became a heroic tale passed among the villagers under the title "The Prince Who Slew the Fell Octorok".

The village's symbol is apparently a fish design identical to the one that appears on the Fisherman's Shield and can be seen on various objects in the village such as rugs and flags. This is not surprising as fishing is a crucial part of their culture and economy. The Fisherman's Shield description states that the design represents hope for a great catch, thus explaining its prominence within village.

Much of the area and its buildings are reminiscent of Outset Island, even having a structure similar to Aryll's Lookout (though it is basically a small uncovered lockout platform like ones found in other areas such as the enemy camp that overlooks the village) from The Legend of Zelda: The Wind Waker. Lurelin Village also resembles Papuchia Village from The Legend of Zelda: Spirit Tracks as both they are fishing villages. However this may be purely coincidental as they all share the same theme of being seaside communities. Moreover, the tunes heard in the day and night versions of the town's song resemble the Kokiri Forest song from The Legend of Zelda: Ocarina of Time, which also shares similarities with the song from Outset Island.