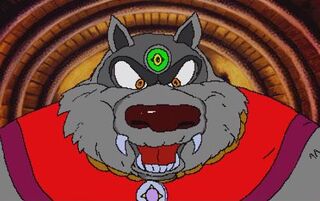 Lupay is an anthropomorphic wolf who is one of Ganon's minions.[1] Lupay has taken over the northwestern region of Koridai, in the eponymous Lupay Stage, where they enslave Koridians by cursing them with Rubies and transforming them into Moblins.[2]

Lupay possesses a third eye in their forehead which fires energy beams. They can only be defeated by reflecting their energy shots with the Reflecting Shield. Upon their defeat, Lupay vanishes and leaves the Crystal of Vision behind.