Lunar Ocarina is the Level 2 weapon in Skull Kid's Ocarina moveset in Hyrule Warriors and Hyrule Warriors Legends. Its design is based on Moon and has a Darkness Elemental Attribute.

It may also have a connection to Majora's Ocarina (Skull Kid's Level 3 weapon) which has a design based on Majora's Mask. 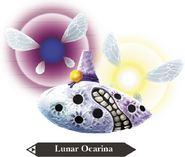 Promotional Render of the Lunar Ocarina from Hyrule Warriors Legends

Retrieved from "https://zelda.fandom.com/wiki/Lunar_Ocarina?oldid=496265"
Community content is available under CC-BY-SA unless otherwise noted.