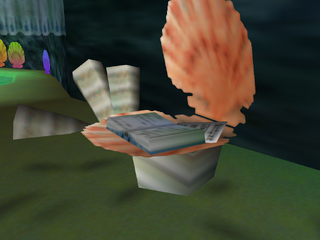 Lulu's Diary is found in her room in Zora Hall. Because it is written in Zoran Script, Link can only read it while in his Zora form.[2]

The Diary contains three entries, in which Lulu divulges the mysterious series of events involving her eggs. The first entry describes Lulu's efforts to discover why she has lost her voice, which she had kept secret from Mikau for two days. Evan, the band leader, recommends she take her eggs to the Marine Research Lab, which she intends to do.[1] In the second entry, Lulu describes her brief struggle with the Gerudo Pirates in the night, who stole her eggs before she could bring them to the Research Lab.[3] Finally, in the third entry Lulu writes that she told her predicament to Mikau, who she fears will react rashly.[4] It was undoubtedly this conversation that led Mikau to confront the Gerudo Pirates and, ultimately, lose his life.