Zelda Wiki
Register
Don't have an account?
Sign In
Advertisement
in: Locations in Spirit Tracks, Dungeons, Stations,
and 2 more 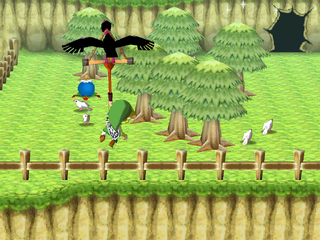 Lost at Sea Station is a location in Spirit Tracks, which houses the Mini-Dungeon of the same name.[1][note 1]

Entrance to the Station

Situated on an island in the southeast corner of the Ocean Realm, the Lost at Sea Station can only be accessed once Link gives five pieces of Dark Ore to Linebeck III. As a sign of gratitude, he will reward the young hero with a Force Gem that reveals the Spirit Tracks to the Station.[3]

When arriving at the Lost at Sea Station, Link encounters a cliff face and little else at ground level. To reach the top of the cliff, where numerous Birds, Crows and Cuccos await, he must play the Song of Birds to call a Bird carrying a trapeze, and use the Whip to grapple onto it. At the top, a hidden cave can be found by activating a Beacon with the Song of Light, then Bombing the rear wall where the Beacon's light shines.

Within the cave, there is nothing but a Gossip Stone; however, when it is activated with the Song of Awakening, it will tell Link of a new temple, based on a "legendary temple" from a distant land.[4] If Link agrees to enter the temple, he will be transported into it, thereupon unable to use his Sword or Bow.[5]

Within the Lost at Sea Station's temple, Link will encounter all four types of Phantoms while he completes the objectives on each floor, which are based on various floors from the Temple of the Ocean King from Phantom Hourglass. The Phantoms cannot be defeated or possessed, as Link is unable to use his Sword and his Bow. Completing a floor's objective will unlock a door to the next floor.

After completing the final floor, Link will come to a Treasure Chest containing a Regal Ring, alongide a Portal that returns him to the Gossip Stone in the Lost at Sea Station. He can return to the temple and replay it as many times as he wants, earning himself an indefinite amount of Regal Rings.

Stations in The Legend of Zelda series
Community content is available under GNU Free Documentation License unless otherwise noted.
Advertisement