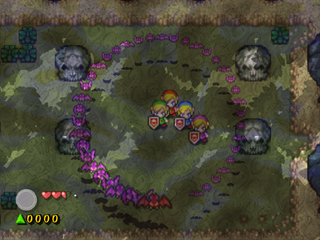 Lost Woods is a stage in Four Swords Adventures.[1] It is the first stage in The Dark World level.

On their search for the Dark Mirror, the Links enter the northwestern region of Hyrule, where a dark cloud now thickly covers it, transforming it into a place known as the Dark World. The White Maiden warps the Links to the Lost Woods to begin their search for the mirror. Once under her control and known as the Forest of Light, the forest has since been corrupted and transformed by the surrounding darkness.[2] It has now become known to many as the Forest of Dark.[3] A temple lies in the heart of the forest, where the Dark Mirror can be found.[4]

The transformed Lost Woods is a haunted forest covered in bones and skulls, greatly resembling the Skeleton Forest from A Link to the Past. A few of the skulls lead to underground passageways. It is inhabited by monsters and followers of Ganon, most notably Deku Scrubs, who pledge undying loyalty and servitude to Ganon, but will not attack the Links. These Deku Scrubs were 'born' in the woods as a result of those who became lost and lingered too long in the forest.[5] By order of Ganon, those who enter the forest are to remain there forever.[6] Through talking to them, the Links learn several clues and details, including Ganon's plan to transform all of Hyrule's forests into one big Lost Woods.[7]

Although seemingly distinct, the Lost Woods of the Dark World bares many similarities to the forest of the same name, in that it is described as a never-ending stretch of woodlands.[8] Despite this, however, it follows a concrete layout and does not feature any navigational puzzles. Although, many of its forest paths bare a close resemblance to each other. The forest also has several Moon Gates, some of which can only be accessed by bringing a Moon Pearl to them.

While searching for clues, the Links eventually receive a Power Bracelet for helping a Deku Scrub named Decci. Using this bracelet, the Links are able to pick up large things blocking their route, allowing them to reach previously unexplored areas of the forest. While the Links are unable to find the Dark Mirror or the temple, they eventually manage to make their way through the cursed forest to Kakariko Village, where their search continues.

Woods in The Legend of Zelda series
Community content is available under GNU Free Documentation License unless otherwise noted.
Advertisement