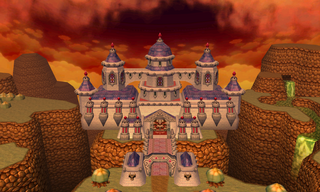 "Lorule Castle" plays inside the eponymous location, Lorule Castle. The song has five variations which are heard as the castle's chambers are completed.

"Lorule Castle" is in the key of A minor and begins with a staccato violin rhythm, followed by a woodwind melody which borrows notes from dorian and harmonic minor scales, producing some major chords where they would otherwise be minor chords. The second section contains a portion of "Hyrule Castle (Theme)" from A Link to the Past played in reverse,[2] and the third section reprises the main melody with additional arrangement.

When Link completes the third chamber, the song's structure changes by adding many instrumental flourishes and a repetition of the main melody in the key of C minor, followed by a new second section that strongly features a portion of "Enter Ganon", foreshadowing the Boss battle against Yuga Ganon. When all four chambers are completed, a vocal chorus will be heard throughout the song.

"Lorule Castle" is one of the 23 playable Songs from the Lucky Lobby Ball. This version is based on the first variation from A Link Between Worlds.