Please improve it as you see fit. Editing help is available.
This article has been flagged since ALBW. 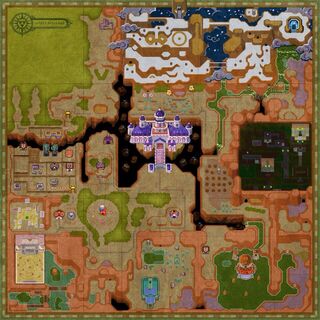 Hyrule
Dark World
Lorule (pronounced /ˈloʊ.ɹuːl/ LOH-rewl)[1] is the name of a kingdom that serves as one of the main settings of A Link Between Worlds.[2] It is a dark mirror of Hyrule almost entirely congruous with the Dark World as featured in A Link to the Past. Lorule is accessed via fissures that appeared in Hyrule, caused by the wizard Yuga. Most of Lorule's locations are isolated from each other by cliffs and large chasms. They must be reached by separate fissures found across Hyrule, which appear following a large quake.

Even though long ago the kingdom was nearly destroyed due to the destruction of its Triforce, at the end of the events in A Link Between Worlds the power of the Hyrulean Triforce is used to wish for the restoration of the Lorulean Triforce by Princess Zelda and Link, which brought the kingdom of Lorule back to its former glory.

The destruction of the Triforce

According to Princess Hilda, Lorule was once a land much like Hyrule.[3] It possessed its own version of the Sacred Realm and its own incarnation of the Triforce.[4] As was the case in Hyrule, the people of Lorule began to lust for their Triforce's limitless power. Many lives were lost as people warred over it.[5] To end the strife, Hilda's ancestors decided to destroy their Triforce rather than seal it.[6] However, without its Triforce, Lorule slowly began to crumble. As the generations went by, Lorule fell further and further into disrepair and edged closer to its doom.[7]

In A Link Between Worlds, Hilda, the current princess of Lorule, learns of the existence of Hyrule and its Triforce. Desperate to save her people, she conceives an elaborate plan with Yuga to steal Hyrule's Triforce, knowing it would condemn the land to Lorule's fate.[8]

Yuga then successfully captures each of the Seven Sages, including Princess Zelda (keeper of the Triforce of Wisdom), and, at Hilda's command, eventually breaks the seal placed on Ganon's spirit so as to access the Triforce of Power he held. Fusing with the Demon King, Yuga fights Link until Hilda appears and uses her power to hold Yuga still so Link could escape the battle safely.

This released Hilda, who though shaken was ready to once again attempt to take the Triforce pieces from Link and Zelda[11], until Ravio, Link's Lorulean counterpart who had once served Princess Hilda before fleeing in cowardice, returns to talk sense into the princess and help her see that stealing Hyrule's Triforce would bring out the worst in Lorule. Finally brought to her senses, Hilda realizes her error and resolves to do the right thing alongside Ravio to return Link, Zelda, and their Triforce to their homeland, even if this meant the end of their own world. The pair took Link and Zelda to their world's version of the Sacred Realm and sent them home from there.

Once home again in their own world, Link and Zelda resolve to make a wish upon the reformed Triforce together to grant Princess Hilda and her world a parting gift. Back in Lorule's Sacred Realm, as Hilda and Ravio turn to leave and watch the dimming of their world, both are shocked and overjoyed to see their world's Triforce restored as a result of the wish Link and Zelda made upon Hyrule's Triforce, thus saving and restoring Lorule. 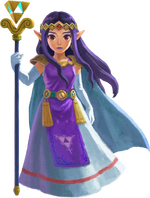 The kingdom of Lorule is governed by a monarchy, of which the only known member is Princess Hilda, the latest descendant of the Royal Family of Lorule. The kingdom was ruled over by the Royal Family during ancient times until they destroyed the Triforce; their fate was unknown. The Royal Family itself rules from the seat of government in the land of Lorule, Lorule Castle, just as Hilda does.

The soldiers used to guard Princess Hilda and Lorule Castle, until they got corrupted by the world's everlasting darkness. Now they guard the Dark Palace and worship the Gemesaur King. There are also soldiers at Lorule Castle, they appear in black armor.

Lorule's official currency is a small jewel-like object known as the Rupee, which is also used in Hyrule. Several color and size variations are used to denote values. Some, such as green, blue or yellow Rupees are worth less than rarer Rupees as red, purple, orange, silver or gold. Rupees are accepted in Ravio's Shop and several other shops around Lorule, and are scattered throughout the land.

Lorule is extraordinarily similar to Hyrule's Dark World, although it has both its own unique features as well as locations more similar to those of the Light World than the Dark. Due to the destruction of its Triforce, the very land itself is crumbling, causing it to be marked by gigantic canyons that separate the kingdom into seven distinct regions. This disintegration eventually begins to reverse with the revival of the kingdom's own Triforce.

Less significantly, Lorule's Turtle Rock is an artificial turtle-shaped island in the middle of its Lake Hylia[citation needed], and its Death Mountain is a frozen hinterland topped by the Ice Ruins, effectively switching the places of the Dark World's Turtle Rock and Ice Palace. Furthermore, Lorule more closely adheres to Hyrule in regards to its counterparts of Hyrule Castle and Link's house, which are Lorule Castle and the Vacant House.

Similar to the populace in Termina, Loruleans are the humanoid, and non-humanoid, counterparts of those in Hyrule. Many Loruleans greatly resemble their Hyrulean counterparts, such as Ravio and Princess Hilda, who both greatly look like their counterparts Link and Princess Zelda. They are similar in age and stature; however, the dark color scheme in Lorule alters physical features such as their hair color and eyes, as well as their clothing. Their personalities seem to differ as well, for as while many Hyruleans are considerate and welcoming, many Loruleans in contrast are rude and hostile.[12] Not all Lorulean people look identical to the Hyruleans; the Milk Bar Owners, for example, bear few resemblances to one another.

With Lorule's resources becoming increasingly scarce some Loruleans resort to banditry. In addition, many begin to envy the monsters because they seem to have a happier life. For this reason, some Loruleans wear monster masks hoping to become monsters themselves.[13]

After losing its Triforce, Lorule resembles the Dark World and the people grow increasingly aggressive and grim.[14]