This article is about the Spirit also known as Satori. For the location, see Satori Mountain. 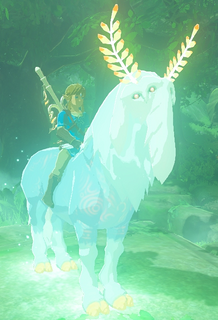 Era of the Wilds
The Lord of the Mountain,[1] also known as Satori,[2] is a Creature in Breath of the Wild.

The general form of the Lord of the Mountain is that of a horse; like ordinary horses, he can be ridden by Link. Unlike horses, however, it is clear that the Lord of the Mountain is a spiritual apparition rather than a natural creature. He can be distinguished from a horse by his luminescent blue color, his deer-like cloven hooves, a pair of golden, frond-like antlers, a shaggy, white, lion-like mane, and a face that resembles a pair of barn owls, pressed together side-by-side. The outer wings of the owls hang down on either side of his head like droopy ears, and the wings that face each other are merged together to form a single large, floppy structure that occupies the ordinary place of a nose and mouth. The Lord of the Mountain's four eyes (two eyes per face) glow with the same golden color as his antlers and hooves. His torso is covered in mysterious, geometric tattoo-like symbols that alternate in color between pink and green.

The Lord of the Mountain resembles Blupees, which flock around it and appear to be otherworldly spiritual creatures. However, the exact relationship between the two is a mystery. It is possible the Blupees appear and animals appear upon the mountain to pay their respects to it when the spiritual protector of the animals makes an appearance, thus its title Lord of the Mountain may be quite literal as even the animals recognize it as their lord and protector.

At the Wetland Stable, Link encounters the Hylian Hunter Quince and his faithful Hylian Retriever Satty. Quince offers to tell Link about a harrowing account of how he and Satty met upon Satori Mountain. During one of the mass animal migrations, Quince a hunter by trade came to the mountain to hunt wild game. During his time there he encountered a hungry Hylian Retriever living in the wild, an extremely rare sight as most live very close to people. Quince took pity on the dog and fed it some meat, causing the dog to inexplicably run off. A tired Quince took a nap but later awoke to find the mysterious creature staring at him. Quince was paralyzed, unable to draw his bow in self-defense. Just as it seemed the creature would attack, the Hylian Retriever he had fed jumped to Quince's defense, barking at the creature and startling it. The terrified Quince took the opportunity to pick up the dog and fled the mountain before the creature could potentially harm either of them. Grateful to the dog which he ironically named Satty after Satori Mountain that shares its name with the creature Quince encountered, Quince adopted the dog that saved his life with the two becoming inseparable companions. As Quince's story is told from his point of view, it is impossible to tell if it truly meant Quince or Satty any harm as both Quince and Satty may have misunderstood the creature's intentions as Satori rarely appears before people though it is unclear if his appearance before Quince was an attempt to punish him for harming the animals or the reincarnated sage had appeared before Quince in an effort to try to get Quince to take Satty, a domesticated animal, with him back to civilization where it belonged as it clearly was having difficulty surviving in the wild, something the Lord of the Mountain likely recognized as a protector of animals. Additionally, its appearance may have been simply been a warning for Quince to leave the mountain.

Regardless of the mountain protector's intentions, Quince was traumatized by the incident to the point of having nightmares about it. Humorously, Quince tells Link if he visits the mountain to tell the spirit off for its behavior towards him and Satty. Ironically, Quince owes the Lord of the Mountain for bringing him and Satty together, which may have been the reincarnated sage's intention all along.

The Satori Mountain is probably named after Satori, the other name of the Lord of the Mountain, and may be an homage to the late Nintendo President, Satoru Iwata.[5]

The mountain along with the Lord are first mentioned by Botrick.