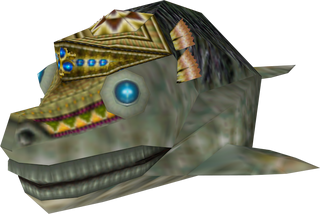 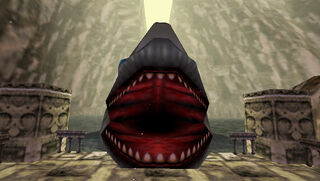 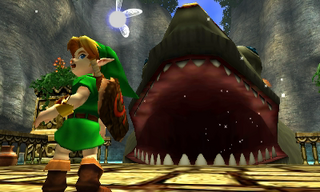 Patron deity of the Zoras

Ocarina of Time
Oracle of Ages

Lord Jabu-Jabu is a recurring large whale-like creature that serves as the guardian of the Zora in The Legend of Zelda series.[2]

Little is known about Lord Jabu-Jabu. In Ocarina of Time, he resides upon an altar in Zora's Fountain,[3][4] a sacred lake behind Zora's Domain, where he is worshiped by the Zoras and acts as a guardian deity similar to the Great Deku Tree.[1] The royal family are tasked with Jabu-Jabu's care.[5] According to Zora legend, offering a fish to Jabu-Jabu is supposed to bring the bearer happiness.[6]

Lord Jabu-Jabu is apparently very benevolent,[7] and the Zora encourage all visitors to see him.[8] After Ganondorf encountered him, however, Lord Jabu-Jabu began displaying outward symptoms of the curse cast on him; as King Zora cites Ganondorf's interference as a reason the whale may have swallowed Ruto, these possibly include changes in his behavior.[9]

Jabu-Jabu is very fond of Fish, and Young Link must feed him one in order to gain entrance to his Belly to kill the parasite which ails him and save Princess Ruto.

Seven years in the future, Jabu-Jabu is inexplicably absent.

In Oracle of Ages, Jabu-Jabu lives in Jabu-Jabu's Shrine, once again near the Zoras in Zora Village, though the exact relationship between this incarnation and the one that appears in Ocarina of Time is unknown. He appears in both the past and present ages of Labrynna, but in the former, he is too small to enter.[10] As part of his quest, Link must venture inside Jabu-Jabu's Belly in the present to obtain the Rolling Sea, the seventh Essence of Time. However, King Zora will initially prevent the young hero from visiting the deity,[11] and in order to gain his permission, Link must first find a way to save Jabu-Jabu's life by cleansing the polluted Zora Seas.[12] To do this, he must rescue the Fairy Queen, allowing her to purify the filthy seawater.[13]

Jabu-Jabu has been compared to the Wind Fish from Link's Awakening, as both are god-like whales or whale-like creatures. He also shares strong similarities with Jabun in The Wind Waker; not only are they both large round fish, but Jabun's theme music is a remix of the dungeon theme for Inside Jabu-Jabu's Belly, and according to Hyrule Historia Jabun is implied to be Jabu-Jabu's descendant. Both of these deity-like whales also resemble the Ocean King from Phantom Hourglass on a lesser scale.

The large fish statue at Zora's Domain in Breath of the Wild represents Lord Jabu-Jabu.[15]