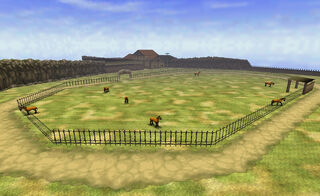 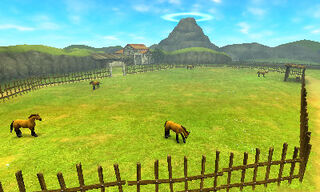 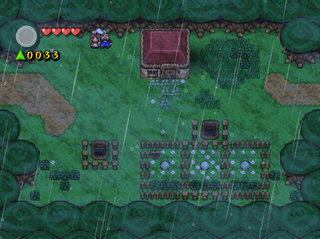 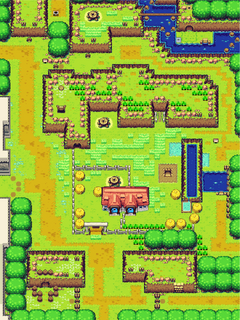 Lon Lon Ranch is a recurring location in The Legend of Zelda series.[1][2][note 1] The ranch belongs to Malon and her father Talon, and is most famous for selling Lon Lon Milk.[4][5][6]

The Lon Lon Ranch is the home of Talon, Malon, Ingo, and Epona in Ocarina of Time. It is located in the center of Hyrule and is owned by Talon.[7] It is a small farm, with one house area and a barn to keep horses and cows safe. It also has a paddock that can exercise the horses daily. The ranch raises Cuccos, horses, and cows. They make a profit by selling off the famous Lon Lon Milk that the cows make to the people of Hyrule. Young Link can win a Bottle full of Lon Lon Milk from Talon after winning the Super Cucco-findin' Game. A storage tower at the back of the ranch, directly behind the paddock, houses a Piece of Heart, as well as two cows. A Secret Grotto can also be found to the left of the paddock as child Link only.

When Link first visits the ranch as a child, Malon introduces him to Epona, a young horse.[8] The farm girl goes on to teach Link "Epona's Song", and Link can play this melody to beckon Epona to him, but he cannot yet ride the horse. Seven years later, Link returns to the ranch to find that it has been taken over by Ingo with the help of Ganondorf and has been renamed to Ingo Ranch. As a result, Talon was kicked out of the ranch, and Malon is forced to obey Ingo's orders or else the horses will be mistreated.[9][10][11]

For a fee of 10 Rupees, Link can ride the horses in the ranch. For an additional fee of 50 Rupees after riding once, he can race Ingo for the chance to keep the horse (namely, Epona, as she is the fastest).[12][13] After losing, he will challenge Link again, this time wagering Epona.[14] Upon being defeated yet again, he keeps his promises and hands over Epona to Link; however, he closes the gates of the ranch, intending to prevent the young hero from leaving the ranch.[15] Link easily jumps over the gate by using Epona, and when he returns to the ranch, he finds that it has returned to its normal state. After losing the horse he had set aside for Ganondorf, Ingo turns the ranch over to Malon, and becomes a much happier and much more humble person after the experience.[16][17] Malon also informs Link that her father will be returning to the ranch soon, and thanks Link for all that he has done.[18]

Link can speak to Malon to take part in a small obstacle course and test his skills by using Epona. The goal is to complete two laps around the racetrack in the fastest time possible while jumping the set fences without missing one. If Link beats the obstacle course record, Malon will reward him by delivering a cow to his house in Kokiri Forest, so that he can easily obtain free Lon Lon Milk at any time.

Lon Lon Ranch can be found in The Field in Four Swords Adventures. Upon arriving to the field, Link encounters a girl named Malon standing all alone. She tells the young traveler that she was running errands, but just as she was about to head back to her home, it started raining; furthermore, the castle guards were moving all the cannons and even aimed their bows at her.[19][20] Helpless, she asks the four Links if she can accompany them until she gets back to Lon Lon Ranch with her father, Talon.[21] Unlike Ocarina of Time, the ranch has no cows or horses to be seen, and there are no buildings except for the house in which the two farm owners live.

As thanks for saving his daughter, Talon allows Link to use his horse to make his journey through the fields much easier.[22] Link can grab one of the carrots that are encased in a crystal ball and throw it on the ground to make the horses magically appear, which the young hero will mount automatically.

Lon Lon Ranch is an area located in eastern Hyrule in The Minish Cap. It connects to five other areas: the Eastern Hills to the south, Hyrule Town to the west, Lake Hylia to the east, North Hyrule Field to the northwest, and Veil Falls to the north.

Malon and her father, Talon, live at the Lon Lon Ranch along with their Cows. After Link fails to cross Castor Wilds, Malon and Talon will be locked out of their home.[23][24] In order to reach Lake Hylia, Link must shrink himself to the size of a Minish, enter the Ranch house, break a Jar containing their Spare Key, and return it to them.[25] As thanks, Talon will grant Link free passage through his Ranch.[26][27]

Located on the Ranch is a tree that can be rammed with the Pegasus Boots to create a Minish Portal and a cave that leads to a Chest containing 50 Rupees and Ankle, who will fuse Kinstone Pieces with Link.[28][29] Link can also fuse Kinstones with Elsie, one of the cows, if he is in Minish form. Link can also buy Milk from Malon and Epona in Hyrule Town.

In Hyrule Warriors: Age of Calamity, Lon Lon Ranch is located in Hyrule Field, south of Hyrule Castle and next to Mabe Village. It is modeled after its appearance in Ocarina of Time. Lon Lon Ranch can be visited during "The Battle of Hyrule Field" Scenario. Lon Lon Ranch was later destroyed and seen later in Breath of the Wild as the Ranch Ruins.