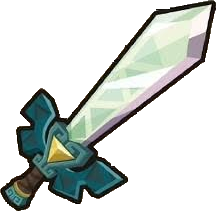 According to Anjean, the Lokomo Sword was given to the Lokomo as a gift. It was once used by the Spirits of Good, who used it to defeat many evil creatures during their lifetime.[2] The Lokomo Sword is given to Link by Anjean inside the Spirit Train after he and Princess Zelda retrieve the Bow of Light from the Sand Temple. Although only spirits had wielded the Sword before, Anjean trusts the Lokomo Sword to Link, saying that he is the one who is meant to wield it.[3]

The Lokomo Sword can stun Phantoms without the need of Tears of Light, since it is already infused with sacred energy.[2] Unlike the Phantom Sword from Phantom Hourglass, it does not defeat them, as it instead stuns the Phantoms long enough for Princess Zelda to possess their bodies. In the final battle against Malladus, Link, with the help of Princess Zelda, thrusts the Lokomo Sword into Malladus's forehead, defeating the Demon King.

In Hyrule Warriors and Hyrule Warriors Legends, the Lokomo Sword appears as the third tier of Toon Link's Light Sword Weapon paired with the Mirror Shield from The Wind Waker.