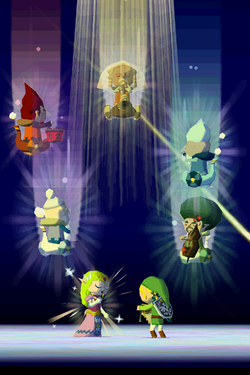 The Lokomo performing together with Link and Princess Zelda

Anjean
Byrne
Gage
Steem
Carben
Embrose
Rael
The Lokomo are a tribe from Spirit Tracks.[1] They are servants to the Spirits of Good, with their sole role being to protect the land, the Spirit Tracks, and the temples scattered throughout Hyrule.[3] Most importantly, however, the Lokomo protect the land from the Demon King, Malladus, by making sure that his prison and locks, the Tower of Spirits and the Spirit Tracks respectively, stay intact at all times to prevent the Demon King's escape. They were originally sent by the Spirits to Hyrule to continue their work of watching over the land for them, and as such, they are considered to be the guardians of the five realms.[4]

The Lokomo play a vital role in Spirit Tracks since they are the only ones who can help restore both the Spirit Tracks and the Tower of Spirits.

All members of the Lokomo have pointy ears, a characteristic they share with Hylians. The Lokomo, with the exception of Byrne, are usually seen riding a sort of small vehicle that bears the symbol of the Spirits.

When a Lokomo dies, they do not disappear entirely. Instead, they take on the shape of a small ball of light that represents their spirit. After this, it will take several years for the Lokomo to return to life in a new form; however, once they are reborn with a new body, they will have no memory of past events.[5] This is similar to the concept of reincarnation.

One Lokomo resides in each of the five realms in the land, and they can always be found in their respective sanctuaries. They are:

Anjean, one of the two members of the Lokomo who does not reside in a sanctuary, is the guardian of the Tower of Spirits and is thus in charge of making sure Malladus does not escape from his prison.[10]

Most Lokomo possess sacred instruments that, when played, have the ability to generate enough energy that powers the Spirit Tracks; however, to do this, special melodies known as the Lokomo Songs must first be performed.[11] These songs are duets that require two sacred instruments to function properly and, once the Lokomo Song is performed, it will help restore the Rail Map's energy, which in turn also restores the missing Spirit Tracks that lead to the each realm's temple.[12]

The Lokomo also seem to have longer life spans than normal humans, as Anjean was already the guardian of the Tower of Spirits by the time Tetra and her pirate crew arrived in Hyrule 100 years prior to the events of Spirit Tracks,[13] and Byrne, who had "a century to train", maintains the appearance of a young man despite his apparent age.[14]

Prior to the events in Spirit Tracks, the Spirits of Good bestowed upon the Lokomo a weapon known as the Lokomo Sword, which is a sword filled with sacred energy used by the Spirits.[15] Moreover, they entrusted the Lokomo with taking care of the Spirit Train, which was to be kept in the center of the Tower of Spirits.[16]

By the time the events of the game start to take place, the Spirit Tracks have begun to disappear due to Chancellor Cole's plan to free Malladus from his prison. He succeeds in stealing Princess Zelda's body, which is to be used as a vessel for the Demon King. Zelda, with the help of Link, travels to the Tower of Spirits to meet Anjean, who is the one that can help give Zelda clues on how to retrieve her body. After Anjean explains to them the current situation of the Spirit Tracks, she charges Link and Zelda with the task of restoring the Spirit Tracks to the Tower of Spirits to fortify Malladus's prison. As such, Link and Zelda travel across Hyrule with the Spirit Train that was lent to them by Anjean, meeting the Lokomo guardians of each realm in order to restore the Spirit Tracks, the chains that bind Malladus. With Anjean's Spirit Flute, Link performs a number of duets with the Lokomo and their sacred instruments as it is the only way to restore the tracks to the temples.[17] Link must continue to repeat this process until all the five temples' rails are restored to the Tower of Spirits.

It is with the aid of Byrne, a Lokomo who turned against his people and his beliefs because the Spirits of Good would not grant him any more power,[18] that Link and Zelda find the Compass of Light and manage to make their way into the Dark Realm, where Malladus, Cole, and the Demon Train have escaped. In the final battle against Malladus, Princess Zelda sings a duet with Link and his Spirit Flute, weakening the Demon King and revealing a weak spot on his back. When Malladus is finally slain using the Lokomo Sword and the Bow of Light, Anjean and the rest of the Lokomo depart towards the heavens since their protection is no longer needed, entrusting Link and Zelda to watch over the land in their stead.[19]

The name of the tribe is a pun on the word "locomotive," which is another word for "train." Lokomo was also the name of a Finnish steam locomotive and railroad equipment manufacturing company.