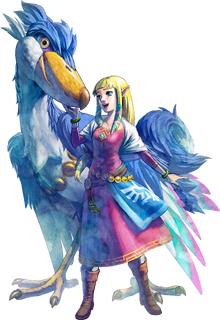 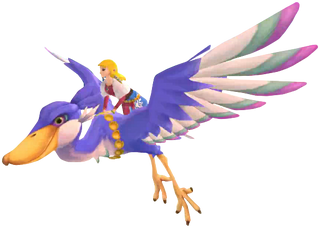 Loftwings (pronounced /ˈlɒftˌwɪŋ/ LOFT-wing and /ˈlɔːftˌwɪŋ/ LAWFT-wing)[citation needed],(Series | SS)[2] also known as Guardian Birds,(SS)[3] are a recurring species in The Legend of Zelda series. They are birds used by the citizens of Skyloft to fly around the different regions and are used during the annual Wing Ceremony.[3]

It is a custom in Skyloft for each person to have their own Loftwing, which is a symbol of the divine protection granted by the Goddess Hylia.[3] A Loftwing and its rider have a special connection, as Skyloftians consider themselves to be one half of a pair until they are made whole by the Loftwings.[3] When a Skyloftian is young, they meet their bird companion under the Statue of the Goddess.[4] Having a Loftwing and being able to ride it separates the kids from the adults.[5]

Loftwings cannot fly during the nighttime since they have a terrible night vision, and only those which have been specially trained can fly in the dark.[6] They can also be taught a special move called the Spiral Charge, but since it is a stressful move for Loftwings to perform, it is usually only taught to senior Knight Academy students.[7][8]

Link's Loftwing is a special, rare breed which had previously been thought to have gone extinct.[10][11]

Under the name of a regular Loftwing, Link's Crimson Loftwing appears as a Support Spirit in Super Smash Bros. Ultimate. When equipped, it creates a strong wind during battle.