Zelda Wiki
Register
Don't have an account?
Sign In
Advertisement
in: Enemies, Common Enemies and Traps, Reptilian Enemies,
and 28 more 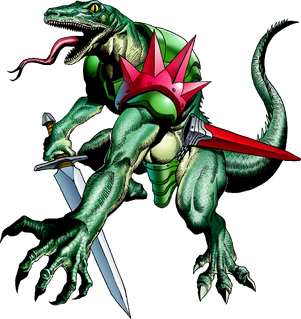 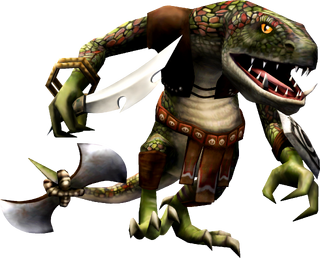 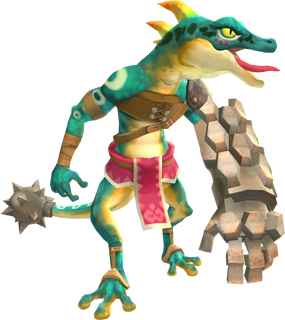 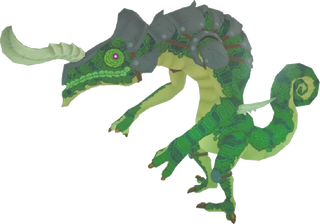 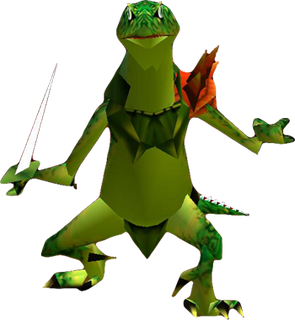 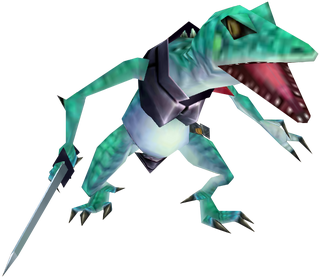 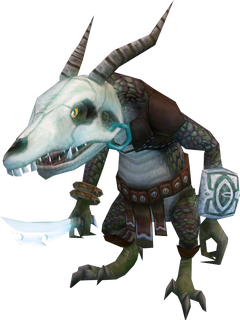 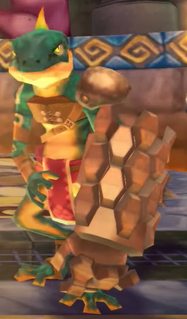 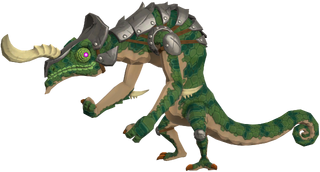 Lizalfos brandish swords and have little armor in Ocarina of Time. They are very agile, for they are able to jump far out of Link's attack range, as well as capable of leaping over the young hero's head to deliver a strike from behind. They first appear in Dodongo's Cavern, where two pairs act as the Dungeons's Sub-Bosses. Despite having to face off against a duo, Link does not have to fight both simultaneously. One engages the young hero, while the other watches from afar. Befitting their tendency to fight in pairs, after one Lizalfos sustains enough damage, the two switch roles with one another. They are seldom encountered, only appearing as regular enemies later in the Spirit Temple and in certain other Dungeons in Master Quest. A related enemy known as Dinolfos appear later in the game as well.

Lizalfos come in two varieties in Twilight Princess. One variety uses an axe blade affixed to their tails, and the second variety makes use of a skull mask. They are easily defeated with Bomb Arrows or Hidden Skills such as the Back Slice and the Mortal Draw. In addition, Wolf Link is able to leap at and bite at their throats. Lizalfos appear in parts of Hyrule Field in Lanayru Province in addition to numerous Dungeons, including the Lakebed Temple, the Temple of Time, the City in the Sky, Hyrule Castle, and the Cave of Ordeals.

Dynalfos, similar but much larger and more heavily armored enemies, appear in the Temple of Time and the City in the Sky. They are considerably more dangerous opponents than Lizalfos, capable of dodging the Ending Blow and blocking many other attacks. A winged variety of Lizalfos called Aeralfos also appear later in the game.[citation needed]

Lizalfos are first encountered in the Earth Temple as regular enemies in Skyward Sword. They later appear as a pair also act as the Dungeon's Sub-Boss, guarding the Bomb Bag. They adorn their forearms with large iron gauntlets that they can utilize in both their offense and defense. For example, the guard prevents them from being knocked over from normal attacks. Besides being adept defenders, Lizalfos are very nimble and can swiftly dodge sword strikes, and they can harm Link by blowing streams of fire and by mashing him with the maces found on the tips of their tails. In addition to the Earth Temple, the saurian creatures can be found at the Lanayru Shipyard, the Pirate Stronghold, and the Volcano Summit. An efficient way to slay a Lizalfos is to use strong attacks that make them fall on the ground such as the Spin Attack. After this happens, Link can use the Fatal Blow to kill them. Defeating a Lizalfos will make it drop a Lizard Tail, which can be collected as Treasure.

A stronger variant known as Dark Lizalfos appear in the Fire Sanctuary and Sky Keep.

Lizalfos appear as chameleon-like enemies in Breath of the Wild. They will camouflage to their environment and wait for Link to get near before ambushing him. There are several varieties of Lizalfos, including Blue Lizalfos, Black Lizalfos, Silver Lizalfos, Fire-Breath Lizalfos, Ice-Breath Lizalfos, Electric Lizalfos, and in Master Mode, Golden Lizalfos. They primarily use weapons of the Lizalfos Gear equipment archetype, such as Lizal Spears that they also use to hunt for fish.[5] They are sometimes also encountered utilizing Hylian-made weapons. When defeated, they may drop Lizalfos Horns, Lizalfos Talons, and Lizalfos Tails.

Electric Lizalfos, found in places such as the Gerudo Desert and Zonai Ruins, have electrified horns that they can use to generate an electric field. If Link manages to hit said horn with an Arrow, it will cause the Electric Lizalfos to discharge involuntarily. He can use this to his advantage to electrocute nearby enemies. Ice-Breath Lizalfos, typically found in cold areas, will spit icy projectiles at Link, and are weak to Fire. Fire-Breath Lizalfos, found in Scorching Climates such as Death Mountain and the Gerudo Desert, can breathe Fire at Link and are vulnerable to Ice.

There are also undead versions of Lizalfos. Stalizalfos rise from the ground during the night in certain areas and attack Link. Cursed Lizalfos can sometimes be found spawning from various Pools of Malice throughout Hyrule Kingdom and within the Divine Beasts.

Lizalfos appear as enemies in the Temple of Time: Ranger Stage in Link's Crossbow Training. Lizalfos can move quickly and counter Link's attacks. They are able to block Link's Crossbow shots with the gauntlets on their left claws, and attack by slashing either the blades they carry or the blades attached to their tails. They can also jump across the room in an attempt to surround Link.

Lizalfos appear in The Legend of Zelda: Ocarina of Time (Himekawa), being summoned by the Twinrova witches alongside some Moblins to try and slow Link down, who shoots an arrow into one's neck.

Lizalfos appear as elite enemies in Hyrule Warriors, serving as Captains in several Forces. They carry blades and arm gauntlets with them, with which they use to attack and defend with. Lizalfos also hop from side to side in battle. Lizalfos can also attack either by slamming their foes with their tails or by breathing fire in the form of fireballs or streams. When blowing streams of fire, their Weak Point Gauges are exposed. They are also weak to Bombs.

Lizalfos also appear as minor characters in certain Scenarios. In "Ganondorf's Return", a Lizalfos leads the Monster Forces of the Gerudo Desert. In the Scenario "The Dragon of the Caves" of Cia's Tale, Lizalfos Chieftain appear as Captains in Volga's Forces. They are accompanied by Dinolfos Chieftain, and arrive as reinforcements when Cia tries to enlist Volga into her army. The Lizalfos Chieftain are much larger and stronger variants of Lizalfos. They also appear in multiple main story Scenarios that include Volga, such as "The Sorceress of the Valley", "Land in the Sky", all Scenarios in Cia's Tale except "The Demon Lord", and even in a mission in Linkle's Tale, "Powers Collide". Lizalfos Chieftain are portrayed as Volga's loyal servants, apologizing to their master when they must retreat during the battle with Ganondorf in the "Darkness Falls" Scenario.[6]

When defeated, Lizalfos may drop Lizalfos Scales as bronze Materials and Lizalfos Gauntlets as silver Materials.

Lizalfos appear as enemies in Cadence of Hyrule. They are mostly stationary enemies that move to the beat of the music, usually standing still while on the lookout for adventurers. Upon seeing Cadence, Link, Yves, or Zelda, they will unsheathe their swords and proceed to charge at them, moving on every beat until they make contact with something. While charging, they can only move in one direction unless they step on a Bounce Trap, which will force them to turn and resume their chase elsewhere. Once contact has been made, they will be stunned for three beats, leaving them vulnerable to attack until they regain consciousness on the fourth beat. In Symphony of the Mask, they blend in with their surroundings until Skull Kid approaches them, similar to Breath of the Wild.