"Blue Lizalfos in particular like this weapon. It has one more blade than the Lizal boomerang to it additional cutting power, and its still returns when thrown."
— Hyrule Compendium

The Lizal Forked Boomerang is an item in The Legend of Zelda: Breath of the Wild. It is a Lizalfos made Boomerang which can be thrown or used as a single handed melee weapon, allowing Lizalfos to wield it in conjunction with Lizalfos made Shields. It can be also obtained and equipped by Link. It has a base attack power of 24 though this can be increased by certain weapon bonuses. It is the second strongest of the Lizalfos made boomerangs, as it is stronger than the Lizal Boomerang though weaker than the Lizal Tri-Boomerang.

Link can take a picture of it with the Camera Rune to add it to the Hyrule Compendium where it appears as entry 225 in the Compendium's Equipment section. According to its description Blue Lizalfos are particularly fond of it, which is a reference to the fact that they are stronger than standard Lizalfos who normally wield the weaker Lizal Boomerangs. It can be found in the Gerudo Desert and Tabantha Frontier regions according to its common locations section in the Hyrule Compendium. In addition to Lizalfos it is occasionally used by other monsters like Moblins. 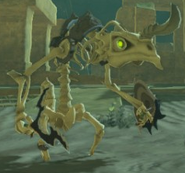 Retrieved from "https://zelda.fandom.com/wiki/Lizal_Forked_Boomerang?oldid=521198"
Community content is available under CC-BY-SA unless otherwise noted.