Many weapons and other items are collected by the player in the Nintendo 64 game The Legend of Zelda: Ocarina of Time to help Link on his quest. The player is allowed to assign three different objects for quick access, with one for "C-Right," "C-Down," and "C-Left." Like Likes can capture certain kinds of Link's equipment, these being his shield and special tunics. They include the Deku Shield, Hylian Shield, Goron Tunic, and Zora Tunic. 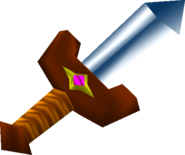 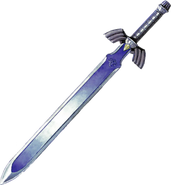 Biggoron's Sword
Add a photo to this gallery

Retrieved from "https://zelda.fandom.com/wiki/List_of_items_in_The_Legend_of_Zelda:_Ocarina_of_Time?oldid=544568"
Community content is available under CC-BY-SA unless otherwise noted.