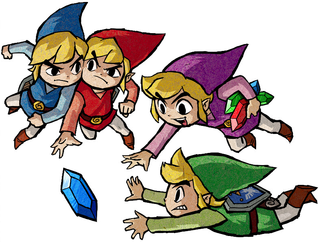 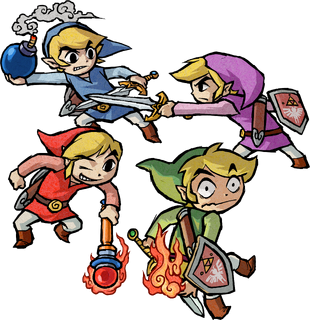 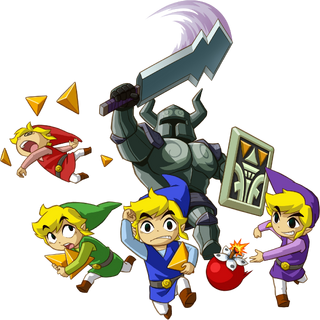 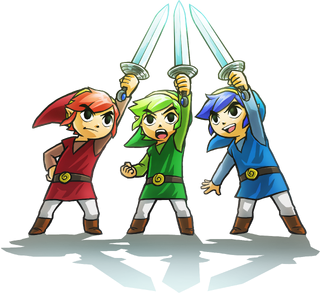 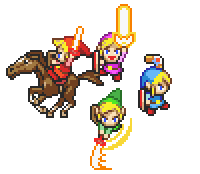 The Links,[4][5] collectively known as the Four-Who-Are-One,[6] refers to a group of characters who are the result of Link after he is split into multiple copies of himself in The Legend of Zelda series.

In Phantom Hourglass and Spirit Tracks, the Links are featured only in the games' Battle Modes.

The series has used the Links for games that include multiplayer and co-op gameplay, with the exception of The Minish Cap, where Link is only briefly split to solve certain puzzles and fight enemies. In multiplayer modes, each player takes control of a Link. In games where single-player mode is offered, the player can switch control between Links.

The Links made their first appearance in Four Swords. After Link and Princess Zelda leave to investigate the Four Sword, which seals the wind mage Vaati, Zelda is suddenly captured by Vaati after he reveals himself. Link is unable to help her and is knocked out, later reawakened by the Great Fairies. Link is split into four after he pulls the Four Sword out of its pedestal by the Fairies' urging. Now tasked with saving Zelda, the Links must work together to get to where she is being held and rescue her from Vaati's Palace of Winds.

The Links travel across the land to several Stages, fighting enemies and collecting Rupees along the way. They compete against each other to collect as many Rupees as possible, but also cooperate with each other to accomplish tasks. At the end of the stage, depending on how many Rupees in total were accumulated, the Links receive a Key from the stage's Great Fairy and are then ranked by how many Rupees each Link collected. The Link with the most Rupees is awarded a Medal of Courage.

The Links eventually reach the Palace of Winds and defeat Vaati. His body is absorbed back into the Four Sword, and Zelda is freed from his hold. With Vaati again imprisoned and the Links' destiny fulfilled, the Four Sword glows as it returns Link to his former self. The Four Sword is then returned to its pedestal.

If there are only two or three players, Link will only be split into two or three Links, respectively. In Four Swords Anniversary Edition's single-player, only two Links are used. The player can choose the tunic color of the second Link and switch between the two to complete tasks.

In the Hyrulean Adventures mode in Four Swords Adventures, Link is again split into four copies of himself upon drawing the Four Sword. Link is called by Zelda to investigate the Four Sword's seal, after dark clouds sweep over Hyrule. However upon opening the Four Sword Sanctuary's portal with the aide of the Shrine Maidens, Shadow Link emerges from the opening as Zelda and the Maidens are captured and encased in dark crystals. Link follows Shadow Link into the Sanctuary, where he willingly draws the Four Sword from its pedestal to combat Shadow Link, despite the risk of freeing Vaati, and splits into four. The removal of the blade subsequently releases Vaati, who then sends the Links flying away by a twister.

The Links awake to the voice of Kaepora Gaebora in Lake Hylia, who tells them that Zelda and the six Maidens have been captured by evil forces. However, due to Vaati's magic, the Four Sword has been robbed of its former power to vanquish darkness. He informs them that they must collect Force Gems to return the blade to its full strength, only then can they find and rescue the Maidens and Zelda, before finally facing Vaati. Like in Four Swords, the Links work together and also compete to collect as many Force Gems as possible, as opposed to Rupees. While on their search for Force Gems, the Links also meet Tingle, who is also looking for Force Gems under the belief that he will become a real Fairy if he collects enough. This results in a small rivalry between the Links and Tingle, who occasionally race against each other for large Force Gems. At the end of every stage are Dark Barriers that must be dispelled, by collecting enough Force Gems to strengthen the Four Sword. After completing a stage in multiplayer, the Links are then ranked by how many Force Gems they have collected.

In a single-player game, the Links can group together to form preset Battle Formations (Cross, Wide, Long, Box), to aide in solving puzzles, pushing blocks, fighting enemies, and performing other tasks. Although the Link donning the green tunic is the default leader, the option exists to use any Link to lead the others.

In a Shadow Battle, the Links instead fight each other in a competitive match.

In the game mode Navi Trackers, exclusive to the Japanese and Korean release of Four Swords Adventures, the four Links are tasked with finding Tetra's Pirate Crew around a maze with limited time, in order to receive and collect as many stamps as possible. In the game mode's intro, the Link in green is surprised to see doubles of himself, implying that this game mode features different Links from the Hyrulean Adventures mode in Four Swords Adventures. In the single-player campaign, Link instead faces off against Tingle.

During his adventure in The Minish Cap, Link reforges and empowers the broken Picori Blade (which had been destroyed earlier by Vaati) into the White Sword with the Four Elements. The White Sword (Two Elements) grants Link the ability to create an additional copy of himself at certain multi-colored tiles, by powering up a Spin Attack charge, holding it until the green gauge is filled, and moving across the colored tiles. The addition of each new Element in the Elemental Sanctuary grants Link an additional copy of himself, up to four.

The Link copies are not individual Links, but rather cloned apparitions that mimic Link's every movement and wear exactly the same green tunic. The clones can be used to perform grouped tasks such as pushing large blocks, or fighting certain bosses such as the Gyorg Pair and Vaati. The placement of the tiles set the formations in which the clones would aid Link in these instances. The Link copies do not last long, however, and will disappear as soon as the green gauge depletes itself. The clones will also instantly disappear if they are interrupted; such as from touching a wall or obstruction, or by being hit by an enemy attack. Pressing the R-button will also immediately make the Link clones vanish.

In Tri Force Heroes, there are only three Links: green, blue, and red. Collectively, they are referred to as the Tri Force Heroes. The green Link is the same hero as in A Link Between Worlds, who arrives in Hytopia after certain events. He dresses to hide his heroic origins.[7] The origin of the two other heroes, also called Link,[8] is unknown.[9] The three Links gather at Hytopia after King Tuft sends an urgent request asking for heroes to assemble to save Princess Styla, who has been cursed by a witch to wear an ugly outfit she cannot take off.[10] The King's request urges for heroes who have the Three Noble Attributes of Courage: pointed ears, sideburns, and side-parted hair. While passing through the land, Link comes across the town during its perilous time. He is immediately spotted by Madame Couture's Assistant and recognized for having these Attributes, and is urged to join the Witch-Hunting Brigade. As only groups of three can enter the Drablands, the witch's domain, Link is paired with two more heroes as they venture into the land and combat its guardians. As these heroes gather, their hair colors also change to match their tunics rather than remaining blond.

As in previous games, the Links are used in the game's multiplayer, and cooperate with each other to solve puzzles and defeat enemies. In single-player, Link can instead be accompanied by two Doppels that can be controlled and switched between at a time.[11] The Links can stack on top of each other as a Totem to reach higher elevations, allowing them to solve different puzzles and fight enemies. To help communicate between players, the bottom screen of the Nintendo 3DS allows for Icons to be pressed, which appear on the top screen. These icons display a range of simple messages, such as to form a Totem or to draw others near. The icons can grow larger with repeated use, to stress the respective message. The Links can also wear an assortment of Outfits, which give them different powers when worn.

In Phantom Hourglass and Spirit Tracks, the four Links appear only in the games' Battle Modes as their form of multiplayer, wherein players play as and battle each other as the Links.

Phantom Hourglass' Battle Mode is a two-player mode that only uses the red and blue tunic colors, and players are assigned randomly. While playing as Link, certain cloning items can be picked up to generate another exact copy which will run in the opposite direction, potentially luring the Phantoms away.[12]

Spirit Tracks' Battle Mode features all four Links, and are used to differentiate up to four different players.[13]

In the Four Swords manga by Akira Himekawa, Link is split into four when he draws the Four Sword in an effort to save Princess Zelda from Shadow Link. Each Link has his own individual personality: Green is focused and motivated, Blue is hotheaded and aggressive, Red is innocent and optimistic, and Violet is calm, cool and collected. Their conflicting personalities and refusal to work together nearly defeats them at the hands of Vaati, but the Links soon realize they need to cooperate in order to defeat him.

In Super Smash Bros. Ultimate, Totem Link appears as a Spirit with no ability.