Linkle's Village is a small hamlet located somewhere in Hyrule that is renown for the Cuccos that are raised there. Linkle lives here peacefully with her family of loyal Cuccos which she raised and protected from local Wolfos using her dual Crossbows, until two of her neighbors inform her of the Dark Forces attack on Hyrule Castle. Spurred into action, Linkle dons a Green Tunic, Crossbows and her grandmother's precious Compass and heads of to Hyrule Castle to defend Hyrule as the Legendary Hero, who she was raised to believe she was by her grandmother, despite the doubts of her fellow villagers. However as she leaves down the road to Hyrule Castle she goes the wrong way, missing a nearby sign that points to the path leading to the castle and ends up lost in Faron Woods. 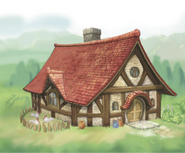 Retrieved from "https://zelda.fandom.com/wiki/Linkle%27s_Village?oldid=529627"
Community content is available under CC-BY-SA unless otherwise noted.