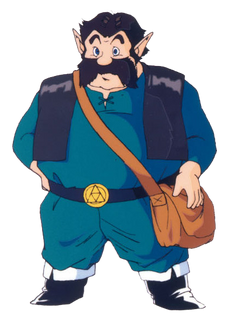 Link (nephew)
Link's Uncle is a character in A Link to the Past.[1]

A former knight in service to the royal family of Hyrule, Link's Uncle has been Link's guardian for some time. He teaches him how to effectively use a sword in the game.

Link, woken in the night by a telepathic plea from Princess Zelda, finds his uncle about to leave the house with a sword and shield in hand. Seeing Link wake, he tells him not to leave the house, promising to return for morning.[2] Ignoring his instructions, Link sneaks into the palace via the sewers in an attempt to rescue the Princess himself. Here, Link finds his uncle mortally wounded, unable to go on. Entrusting him with the task of saving the Princess, he gives Link his sword and shield and teaches him the Spin Attack before dying.[3]

At the end of the game, after Ganon has been defeated and Link makes a wish on the Triforce, Link's Uncle is shown to be alive and well in the credits, where he seems to be practicing sword fighting with Link in front of their house.

In the Game Boy Advance version of the game, Link's Uncle appears in the Palace of the Four Sword, wounded. However, when Link speaks with him, he transforms into Blind the Thief.

In the A Link to the Past comic by Shotaro Ishinomori, it is mentioned that Link's Uncle adopted Link because his parents stumbled into the Dark World, shielding him from the intrigues of the Royal Family.[4]

At the beginning of the comic, Link's Uncle goes to Hyrule Castle to confront Agahnim while Link is still asleep. When Link wakes up in his house to find that his uncle is missing, he panics but heads to Hyrule Castle after hearing Princess Zelda's plead. Link sneaks into the castle and sees his uncle dueling Agahnim, who deals a deadly strike to Link's uncle, saying that anyone who challenges him will meet their doom, and promptly vanishes afterward.[5] Link rushes to his uncle's side and receives his sword and shield from him. Before passing out, Link's Uncle explains that after the young hero rescues Zelda and the people in the Dark World, he might be able to meet his parents.[6] After he passes away, Link promises to defeat Agahnim with the use of the Master Sword to avenge his uncle's death.[7]

Once Link reaches Death Mountain, he stumbles upon a portal to the Dark World, which activates itself and shows a vision of his parents standing with his uncle.[8] Link's Uncle is not seen again until the end of the comic after Link defeats Ganon and peace returns to Hyrule: at Hyrule Castle, Link sees a vision of his father, mother and uncle, who congratulate him on his difficult victory and tell him to never forget the efforts of the many generations of knights and Wise Men that preceded him.[9]

Legacy as an Archetype

The character Rusl from Twilight Princess may have been inspired by Link's Uncle. They are both swordsmen who serve as Link's mentors and father figures, and are wounded during the game. Additionally, they both have their hair parted in the middle and have facial hair of a different color.

In official artwork, Tarin from Link's Awakening resembles Link's Uncle. Both are rotund, have big round noses, black hair (Link's Uncle's hair is purple in the game but black in artwork), and large mustaches.