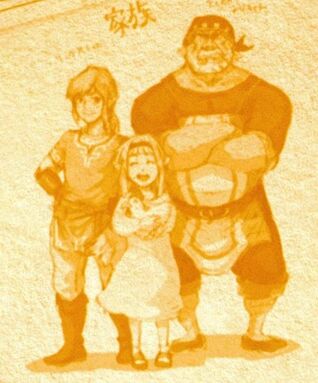 In Breath of the Wild, Link's Father was a knight who serves Hyrule's Royal Family. From this relation, Link followed his father's path to become a knight as well.[1] Despite his knighthood, his family was not nobility.[2]

The Legend of Zelda (Mishouzaki)

Rune is an elf who has only appeared in the original The Legend of Zelda manga by Yuu Mishouzaki. His affair with Princess Zelda resulted in her becoming pregnant with Link.

Link's father appears in the story entitled "Coming Home", in which Link comes home to Calatia, only to find that Dark Link has impersonated him and taken over the country. Arn throws Link out of his house and disowns him, thinking that he has turned evil. Once Link defeats his impostor, Arn apologizes for his behavior and accepts Link back into the family.

In the A Link to the Past comic by Shotaro Ishinomori, it is revealed that Link's parents were both Knights of Hyrule; however, they somehow stumbled into the Dark World, leading Link to be adopted by his Uncle instead.[3] When Link's Uncle is defeated by Agahnim, he mentions that if the young hero manages to rescue Princess Zelda and the people in the Dark World, he might be able to meet his parents.

Link's parents are seen for the first time in the comic as Link is walking through Death Mountain, where he activates one of the Dark World Portals and sees a vision of his mother and father. Although Link tries to reach out to them, his hand turns into a claw when it passes the portal's boundary.[4][5] Link's parents are not seen again until the final chapter after Link has defeated Ganon and peace returns to Hyrule. At Hyrule Castle, Link sees a vision of his father, mother and uncle, who congratulate him on his difficult victory and tell him to never forget the efforts of the many generations of knights and Wise Men that preceded him.[6]

The Sound & Drama CD mentions Link's father and gives him the name Banzetta. He was a soldier of Hyrule who fought to protect the Triforce.[7] He died fighting Ganondorf's men who killed his wife Loretta, leaving his young son Link in the care of Zelda's nursemaid Egorowa, whom he asks to raise his son as a Knight.[8]

In the A Link to the Past manga by Akira Himekawa by Himekawa, Link's father was once a friend of Agahnim, who trained with the sword while Agahnim trained with magic.[9] When Link's father told Agahnim that he was a descendant of the Knights of Hyrule, Agahnim researched the legend of the Triforce. He became so consumed with greed that he trapped Link's parents in the Dark World and struck an evil bargain with Ganon.[10] Link was left alone to be raised by his Uncle.

In the Ocarina of Time comic by the German Nintendo Power, Link's father is a central character for the first part of the story. He is a captain of the Soldiers who is worried that the Hyrulean Civil War may threaten his young son and plans to flee with his wife to the Kokiri Forest. However, the night before they plan to leave, a rebellious mob breaks into the castle and attempts to overthrow the king. Link's father attempts to defend him, but is struck down and dies.

When Link wakes up from his seven-year sleep in the Ocarina of Time manga by Akira Himekawa, Rauru the Sage of Light tells him that his Link's family was part of the guardians of the Royal Family and his father was part of the Hylian Knights until he was killed in battle.

In the Four Swords manga by Akira Himekawa, Link's father is a Knight who often has to curb his son's obstinance and tendency to rush into situations without relying on his allies. He is captured and brainwashed by Vaati, and is forced to duel his son, tricked into thinking that he is Shadow Link. He manages to break the curse himself by tossing a knife at Vaati, who had impersonated Princess Zelda.