"Link, I'm going out for a bit, but there's no need for you to worry. I'll be back by morning, but I don't want you leaving the house until then..."
— Link's Uncle

Prior to the events of the game, Link and his uncle lived together in a house south of Hyrule Castle. Eventually, the King of Hyrule is betrayed by his trusted servant, Agahnim, who went on to take control over the Hyrule Guards and imprison Princess Zelda in the dungeon of the castle. The game begins as Link witnesses his uncle, who has heard the telepathic call for help from Zelda, leaving the house armed with a sword and shield, asking him to remain in the house.

Unbeknownst to Link's Uncle, however, Link also hears Princess Zelda's call for help. When Link's Uncle is out of sight, Link travels through the rain to Hyrule Castle. He finds a secret entrance into the castle and in a narrow passage, he finds none other than his uncle. His uncle has been mortally wounded, gives Link his sword and shield, and teaches him the Spin Attack, telling him that he is the only one with the power to stop the evil that threatens the land of Hyrule. Recalling fond memories of their time together, Link's uncle then draws his terminal breath mid-sentence, the meaning of which was disputed until recently:

Link eventually fulfills the promise to his uncle, defeating Ganon and using the power of the Triforce to undo the evil that Ganon wrought. Among the evil deeds that were undone was the slaying of Link's Uncle, who is brought back to life. The two go back to living together in peace.

The Legend of Zelda: A Link to the Past manga

In the A Link to the Past manga, Link's Uncle owns an apple orchard. He plays the same part in the story as the game as the man who raised Link and cared for him. Link witnesses his uncle's death at the hands of Agahnim; in the game, it is never ascertained who struck the killing blow. Link's Uncle speaks to Link briefly before passing away. Later, when Link is in the Desert of Mystery, he comes upon a portal to the Dark World. He sees his deceased father and mother as well as his uncle, but as he reaches out to touch them, his hand reaches through the portal to the Dark World, transforming it into a beast-like hand. Link's hand is later cured by Princess Zelda in a dream.

In the original Super Nintendo Entertainment System and Virtual Console versions of A Link to the Past, the uncle's last words were "Zelda is your...". The meaning of this phrase has long been debated, leading some to believe that the entire sentence would have read "Zelda is your sister". Today it is generally accepted that it was meant to be something along the lines of "Zelda is your destiny", though a more accurate translation results in "You are the princess's...", which still leaves room for speculation as to what the conclusion to the statement is, most likely being "only hope". In any case, the Game Boy Advance version of A Link to the Past features a new translation with numerous changes to the dialogue and text, including the aforementioned phrase[1]. Through a certain glitch, it is possible to find the body of Link's uncle that can be conversed with and will speak the original dialogue before transforming into Blind the Thief. He also does this when encountered in the Palace of the Four Swords. 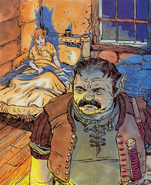 The death of Link's Uncle
Add a photo to this gallery

Retrieved from "https://zelda.fandom.com/wiki/Link%27s_Uncle?oldid=435264"
Community content is available under CC-BY-SA unless otherwise noted.