For the Boss that refers to itself as “Link’s shadow,” see Shadow Hag.

Link's Shadow appears as the final boss after Link defeats Thunderbird in the Great Palace. He serves as the final test before Link can obtain the Triforce of Courage and wake Princess Zelda. Link's Shadow is the most difficult opponent to appear during Link's second quest to save Hyrule.

The strategy for Link's Shadow is to attack him where his guard is down. Another strategy that many mistake for a glitch is to duck in the very left corner of the arena and repeatedly stab when he gets close.

Dark Link's appearances in Event Matches during Super Smash Bros. Melee and Super Smash Bros. Brawl are largely based upon this battle. This battle also formed the basis of the Streetpass Battle Mode of A Link Between Worlds, marking only the second time that music from The Adventure of Link returned to use in another Zelda game, the first being in The Minish Cap.

The Adventure of Link (Mishouzaki)

Link's Shadow is an antagonist in The Adventure of Link (Mishouzaki).

In the The Legend of Zelda comics by Valiant Comics published by Valiant Comics, Link's Shadow is featured in the "Coming Home" story of the fifth issue. Referred to simply as the Shadow and described by himself as a servant of Ganon, he has the ability not only to mimic Link, but any other person. While Link is away in Hyrule, the Shadow, disguised as Queen Seline and accompanied by Thunderbird, attacks the monarch of Calatia and defeats her using her own magical powers. He then locks her away in the tower of the Calatia Palace, taking over her kingdom and making her people suffer under his rule.[4] When an unsuspecting Link returns to Calatia to visit his parents, he is violently greeted by his father, claiming that Link is not his son and ordering him to leave and never come back.[5] Confused, Link begins to travel around Calatia but receives the same mistreatment with everyone else in town,[6] and so he decides to see Queen Seline to figure out what has happened.[7] When Link goes inside the palace's throne room, he finds that the Shadow and Thunderbird have made the queen their prisoner and taken her place instead.[8][9]

Once Queen Seline explains to Link what has happened, the Shadow takes his two prisoners and sentences them to death for committing treason against their own king.[10] The queen then halts him and demands her right of a life trial since it is Calatian Law that anyone sentenced to death has the right to trial by combat to prove their innocence.[11] Thunderbird questions Link's Shadow if it is wise to let the restless citizens witness such an event,[12] but still the Shadow accepts Seline's challenge to thus crush the people's spirits by defeating their queen again.[13] In accordance with the ancient laws, Seline chooses Link to fight in her place,[14] and Link agrees.[15]

The Shadow tries to persuade Link to leave by disguising himself as Princess Zelda and appearing to him as a projection urging him to return to Hyrule, claiming it is under attack.[16] However, when Link refuses,[17] Link's Shadow decides to ask Ganon for help in defeating Link.[18] Ganon explains to the Shadow that he will be able to easily defeat his good counterpart since tomorrow is the Day of the Triforce,[19] which is when, once each decade, the three Triforce pieces disappear for reasons unknown from dawn to dusk.[20] During the battle, after a short struggle, Link's Shadow easily bests the young hero, but just as the Shadow is about to deliver the final blow,[21] a swift move by the real Link causes for the both of them to dangle from the edge of the arena, getting ready to fall into the fire pit below. Link angrily explains that he had to let Zelda face her doom alone just so that he could put an end to his evil counterpart's tyranny,[22] but just then the fake Link explains that Zelda lives and it was all a trick.[23] Suddenly realizing the true nature of the enemy he is facing to be the Shadow he fought at the end of the Great Palace.[24] With the Shadow's sword gone and Link's sword point at his back, Link threatens to kill his counterpart unless he orders the Daira guards to drop their weapons, upon which Link's Shadow obediently commands.[25]

Shadow Enemies in The Legend of Zelda series 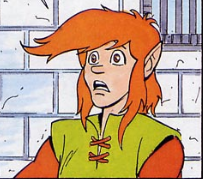