Throughout The Legend of Zelda series, Link often has a variety of partners accompanying him on his journey throughout the game. These partners usually provide helpful hints and assistance with completing the game.

Epona is a horse sometimes owned by Link and sometimes by Lon Lon Ranch. She has had a number of appearances, but can only be ridden in-game in Ocarina of Time, Majora's Mask, Four Swords Adventures, Twilight Princess, and Breath of the Wild. In Four Swords Adventures, she can only be ridden for a short period of time. She appears in the Oracle games and The Minish Cap, but is not a playable part of these games. In games such as Ocarina of Time, Majora's Mask, and Twilight Princess, Epona can be called by playing Epona's Song. She allows Link to travel at a faster pace than walking.

Navi is Link's Fairy partner in Ocarina of Time. She joins Link at the start of the game at the request of the Great Deku Tree and helps Link on his quest to defeat Ganondorf. She leaves for unknown reasons after the threat of Ganon has been lifted.

Ricky, Dimitri, and Moosh are Link's three animal companions in Oracle of Seasons and Oracle of Ages. Each has a special ability that will aid Link on his quest: Ricky the kangaroo has powerful legs that allow him to jump onto high ledges in a single bound; Dimitri the Dodongo is a strong swimmer who can swim against strong currents and even up waterfalls; Moosh is a flying bear that can hover across pitfalls and large gaps. Though he encounters all three of them on his adventure, Link is eventually paired up with one in particular for the remainder of the game after receiving their flute, which allows Link to summon his chosen partner on command. The landscape of the Labrynnian Nuun Highlands, and Natzu in Holodrum, changes to suit the abilities of the animal Link pairs up with. 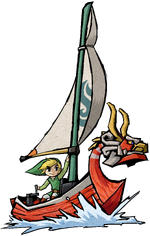 King of Red Lions, or King Daphnes Nohansen Hyrule, is one of the Kings of Hyrule, and appears to be a ghost that operates the boat remotely. He helps Link travel through the Great Sea in The Wind Waker and is essential in stopping Ganondorf from making his wish upon the complete Triforce to rule Hyrule. At the end of the game, the king himself chooses to remain in his kingdom as it is washed away, while Link is shown setting sail in the now-lifeless boat in search of new lands.

Ezlo is a Minish wizard who was cursed by Vaati into the form of a hat with a bird's head in The Minish Cap. He was once the mentor of Vaati. Ezlo helps Link travel through Hyrule and has the ability to shrink Link to Minish size. After Vaati's defeat, the curse is broken and Ezlo returns to the Minish homeland.

Midna, the Twilight Princess, is Link's partner in Twilight Princess. She is the Princess of the Twili, but Zant usurped the throne from her. It is through her that Link can change into a wolf and back on will. She was cursed by Zant into an imp form, and she is restored to her original form when Ganondorf is defeated. In the end of the game she goes back to the Twilight Realm, and destroys the Mirror of Twilight. Some fans theorized that there is a possible romance between Link and Midna.

Linebeck is a sailor who Link meets in Phantom Hourglass. He is greedy and loves treasure, but travels with Link after finding out he could have some gain from it. Linebeck is very cowardly. He stays at the shore while Link goes through dungeons and goes on islands, much like the King of Red Lions. At the end he puts aside his cowardice to try and help Link.

Ciela is Link's Fairy in Phantom Hourglass. She does not remember who she is, or where she came from. Regardless, she is more than happy to help Link in his quest to rescue Tetra from the Ghost Ship. She's good friends with Oshus, whom she affectionately calls "Grandpa." Throughout their adventure, she aids Link by providing helpful hints and information (not to mention keeping Linebeck's ego in check). Eventually, she learns that she is a one of the Ocean King's guardian spirits, the Spirit of Time and Courage, and in the climactic battle with Bellum, uses her newly-remembered powers to help Link stop time and win the day once again. At the very end, she stays behind with Oshus and the other spirits as Link returns to his own world. The other Servant Spirits can also serve as Link's companions.

Princess Zelda is the recurring princess of Hyrule in The Legend of Zelda series. In Spirit Tracks, Zelda accompanies Link in his quest to stop Chancellor Cole from releasing the Demon King from the Spirit Tower. When Zelda's spirit is separated from her body early on the game, Link is one of the few that can see her ghost and he helps her in retrieving her body. As a ghost, she has the ability to control Phantoms. It is theorized that there is a possible romance between Link and Princess Zelda, evident in several titles including Ocarina of Time, The Wind Waker, and Skyward Sword. 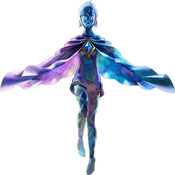 Fi is the ethereal spirit of the Goddess Sword, and is Link's companion on his journey in Skyward Sword. She has a synthetic voice similar to Midna, but unlike Midna is very factual, preferring to use percentages and numbers in her briefings to Link. She is a physical manifestation of the Goddess Sword, and resembles its hilt in her overall design. Fi was created by the Goddess Hylia to aid Link in his journey to save Zelda. She is programmed with knowledge of the land, as well as knowledge of enemies, and holds messages directly from Hylia to Link. Fi's presence is implied to reside within the Master Sword in Breath of the Wild, but she is never seen or heard speaking. Princess Zelda can hear Fi after awakening her power.

The Crimson Loftwing is a rare Loftwing owned by Link in Skyward Sword. He serves as Link's way of transport between the several Islands in The Sky and the several sections of The Surface, a role similar to that of Epona in many other games. Link and his Loftwing share a special connection; as a young boy, Link was able to ride his Loftwing without needing any instructions.

Wolf Link can be summoned in Breath of the Wild by scanning the Wolf Link amiibo with the amiibo Rune. Wolf Link will follow Link and assist him in combat. It is not clear if Wolf Link is canon or not.

In The Legend of Zelda TV series, Link is accompanied by Spryte, a fairy princess.

In The Legend of Zelda comics by Valiant Comics, Link's companion fairy is Miff.

In A Link to the Past comic by Shotaro Ishinomori, Epheremelda is fairy that appears after Link retrieves the Master Sword in the Lost Woods and after he fights Agahnim for the first time. Link saves her from a group of thugs who want to abuse her magic.

In Link's Awakening manga by Ataru Cagiva, Link was accompanied by a fairy called Felicia. After the Wind Fish awakens, she disappears, along with the rest of Koholint Island.

Proxi is a Fairy that Link saves in "The Armies of Ruin" Scenario in Hyrule Warriors. She accompanies him thereafter, and speaks on his behalf.