Zelda Wiki
Register
Don't have an account?
Sign In
Advertisement
in: Objects, Objects in A Link to the Past, Objects in Link's Awakening,
and 13 more 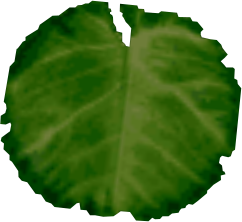 In most games, Lily Pads are merely aesthetic objects that serve no purpose other than being part of scenery. In some games, however, including A Link to the Past, Link's Awakening, and Oracle of Seasons, they appear as giant plants that act as solid platforms in otherwise watery areas where the water is shallow. Since walking in shallow water slows Link down, these platforms can be used to walk on instead. These Lily Pads usually appear in swamp locations, such as the Swamp of Evil, Goponga Swamp, and Spool Swamp, respectively.

In Ocarina of Time, there are Lily Pads in the Fishing Pond. These serve as nothing but scenery, however, the Sinking Lure and the Hyrule Loach can potentially be found among them. The Fishing Hole in Twilight Princess has similar Lily Pads.

When Link is in his normal form, he can climb and stand on one of these for only a few seconds before it collapses under him. After a while, it reappears. However, as Deku Link weighs less, as long as Link is wearing the Deku Mask, he can stand on one without it collapsing. Due to this attribute, Deku Link can use the Lily Pads to safely navigate the poisonous waters of Termina's swampland. Doing so is necessary to access certain areas of the Deku Palace.

A similar type of Lily Pad, under which Bio Deku Babas can live, can be found in the Great Bay Temple, as well as in Secret Grottoes. This variety will support all of Link's forms. A Bio Deku Baba will rotate with its Lily Pad when it turns toward Link, and if Link tries to use it as a platform it will eventually flip and toss him off.

Another type of Lily Pad can be found in Woodfall Temple. They feature red leaves with fangs. Deku Link can also use them as platforms to cross poisonous water. However, if Hylian or Zora Link stands on them, he will be attacked. They can only be immobilized by clearing the poisonous water from the room in which they are located or by standing on them as Goron Link.

In The Wind Waker, a single large Lily Pad appears in the Forest Haven. Link must stand on it in order to speak to the Great Deku Tree.

In Four Swords Adventures, Lily Pads act as platforms in The Swamp stage. The Links can use the Roc's Feather to hop from pad to pad, avoiding the poisonous water. At times Zoras will pop up from under a Lily Pad, sending anyone on top of the Lily Pad high into the air. The Links can perform a super jump this way by allowing themselves to be flung into the air in order to reach another Lily Pad or even land on the ground.

Two varieties of Lilies appear in The Minish Cap. Small, three-leaved Lilies are found in Overworld areas where there is water. They appear in shallow streams and puddles in Minish Woods, as well as the deeper water and swamplands of Castor Wilds. The three Lilies that appear in Castor Wilds only appear as a result of three separate Kinstone Fusions with either Zill or a Forest Picori in Minish Village.

The other type of Lily appears in Minish-sized paths at Lake Hylia and Castor Wilds, as well as Deepwood Shrine and the Temple of Droplets. These Lilies can be drawn in and propelled with the Gust Jar; Link can shoot bursts of air in the opposite direction to propel it forward. This is required to navigate these areas. Stretches of water navigable in this manner frequently have Pestos flying overhead that will attack Link if he draws near.

In Skyward Sword, Lily Pads are large enough to support Link, and have pink thorns that branch out underneath. There are two types of Lily Pad. One has a small cluster of thorns around the base of a hook-like structure extending from the bottom. The other has a much larger cluster of thorns on the bottom and no hook. Both of these types can be found in the Ancient Cistern, and also Faron Woods when it is flooded.

If Link jumps down from a high place onto either variety of Lily Pad, it will flip over.[4] If a Lily Pad with the hook-like structure is flipped over with the thorns on top, Link can use the Whip to grab the hook and flip it over again. This does not work on the hookless variety, however.

Link will get injured if he touches the thorns. As long as the thorns are on top, he cannot stand on it, and the thorns will also block his path underwater. The hookless variety with the large cluster of thorns is often found blocking passages in the Ancient Cistern, and one such Lily Pad has a Tadtone trapped in its thorns when Faron Woods is flooded.