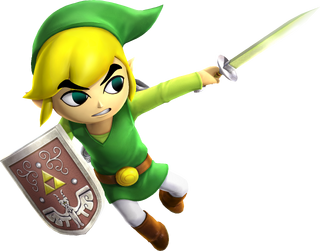 Defeating Enemies
The Light Sword is a class of Weapon used by Toon Link in Hyrule Warriors.[name reference needed] It is associated with Light.

Against Captains and Warriors, Toon Link attacks the enemy in a panic as others get caught in the radius, before ending the attack with a final swipe. He then pants heavily in exhaustion. Against Giant Bosses in Hyrule Warriors, Toon Link uppercuts the boss with a sword slash, then comes down with a piercing stab.

Within a frontal radius, Toon Link charges his blade with magical energy and performs the Hurricane Spin. After the final blow, Toon Link becomes dizzy momentarily.