Guardian deities of the four provinces of Hyrule

The Light Spirits are the guardian deities of the provinces from The Legend of Zelda: Twilight Princess. They are four god-like entities; Ordona, Faron, Eldin and Lanayru. Each Light Spirit resides in a water-filled shrine in the province named after them. They protect their respective provinces using the life force of the gods.

It is known that three of the Light Spirits are named after the three goddesses, and that parts of their names are included in the names of the spirits. Nayru is found in Lanayru, Din's name is in the end of Eldin and part of Farore's name is present in Faron. Part of Farore's name could also be present in Ordona's name, although it could be argued that don, or, and na could also be taken from the names of the other goddesses. Interestingly, when Lanayru reveals to Link the origin of the Fused Shadows, it mentions that three spirits were called by the Gods to seal the pieces away. This is explained that Midna had a piece of Fused Shadow in the Twilight Realm, and since there were three left, the Goddesses only needed the help of three. It is also possible that Ordona didn't exist at the time, similar to Ordon.

A resident of Hyrule Castle Town claims that the Lanayru is only visible to those who are truly courageous and brave. This may simply mean that Lanayru, and perhaps other Light Spirits, only choose to show themselves to certain people, since Zant also appears to be able to see Lanayru when he attacks the spirit.

Eldin, Faron, and Lanayru share their names with the Three Dragons from The Legend of Zelda: Skyward Sword.

Aside from keeping the light shining in Hyrule, not much else is known about the powers of the Light Spirits. However, it can be assumed that they have healing powers; whenever Link collects a Tear of Light, a fragment of the light spirit's power, it heals one heart's worth of damage. Also, Link's hearts are slowly replenished whenever he stands in a Spirit's Spring, and lastly the Light Spirits were shown bringing Midna back to life, indicating that they can heal fatal wounds and resurrect deceased beings.

Exposure to the light they produce is normally harmful and potentially fatal to Twili and other entities native to the Twilight Realm, which is shown when Midna is severely injured after being exposed to Lanayru's light by Zant. Twili however can survive in the Light World by taking on the form of a Shadow.

Due to the power he received from Ganondorf, Zant became immune to their light and capable of briefly overpowering Lanayru when it attack him after he had dared to entered its shrine to confront Midna and Link. It is also shown that they are unable to heal Twili that have been exposed to light as Lanayru was unable to heal Midna and was forced to send Link to Zelda who managed to heal Midna. After being healed by Zelda, Midna was granted or became immune to their light, allowing her to survive in the Light World.

During the final fight, Princess Zelda asks the Light Spirits to "grant her the power to banish evil". She and Link then vanish out of Ganondorf's path, and the Spirits give Zelda the Light Arrows. They are capable of teleporting people and showing them visions.

The Light Spirits act as the guardians of the light within Hyrule. A long time ago, a tribe of Dark Interlopers who excelled in the dark magical arts tried to take control over the Sacred Realm and take the Triforce for themselves. Not allowing this to happen, the goddesses had the Light Spirits stop them. The Light Spirits sealed away the tribe's magic into the Fused Shadow and the interlopers were cornered into the Gerudo Desert. The tribe were then banished to the Twilight Realm by the Goddesses at Arbiter's Grounds with the Mirror of Twilight acting as a portal to the two worlds. This would not be the end between their feud however.

After some time had passed, one descendant of the tribe known as Zant attacked Hyrule and ordered his minions to steal the light of the spirits. This causes the Shadow Beasts to roam within Hyrule without succumbing to their natural weakness. The light of the spirits were later retrieved by Link, which allows the Light Spirits themselves to appear in front of him. They each tell Link about themselves and the Twili, as well as assist him in one way or another throughout his adventure. They also give Link and Midna information on the whereabouts of the Fused Shadows. While they are enemies of Zant, they seem to have no ill will towards the Twilight Princess, Midna as they most like recognize her noble heart and due to their shared animosity towards the Usurper King of Twilight, Zant. However Lanayru ends up unintentionally injuring Midna when Zant expose her to its light, forcing Wolf Link to seek out Princess Zelda to heal her.

The Light Spirits are present in the final battle against Ganondorf, where they combine their powers to create the Light Arrows for Zelda to use. When Ganondorf is defeated, they appear before Link and Zelda, along with Midna whom they resurrect.

"A bow used by the princess who fought the beasts of twilight alongside the hero. It's said to contain the spirits of light's power. It fires arrows straight and true, as if beams of light."
— Twilight Bow description

In The Legend of Zelda: Breath of the Wild, the Light Spirits are referred to as Spirits of Light in the description of the Twilight Bow an Amiibo exclusive bow based upon the Bow of Light wielded by Zelda in Twilight Princess. Its description states the Twilight Bow is said to contain the Spirits of Light's power and it utilizes the same Light Arrows from Twilight Princess. It is also suggested in one of Link's Recovered Memories that they may be the spirits tied to the ancient gods that Zelda prayed to as part of the rituals to awaken her dormant sealing powers. Though she may have been referring to the three Dragon Spirits, the Zelda from Twilight Princess prayed to the Light Spirits which are known to be tied to the ancient gods of Hyrule given their defense of the Sacred Realm and Triforce during the Hyrulean Civil War. Additionally Zelda mentions Lanayru's decree concerning training at the Spring of Wisdom upon Mount Lanayru, though it is unclear if she was referring to the Light Spirit, Thunder Dragon, or was simply referring to the Mountain the decree pertained to. 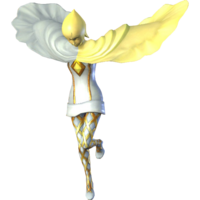 As part of the Twilight Princess DLC, Fi has an unlockable Light Spirit recolor of her Standard Outfit, called Standard Outfit (Twilight). It is also implied that Princess Zelda calls upon the Light Spirits power as part of her Rapier moveset, as she appears surrounded by orbs of light that combine to form her Rapier in her Battle Intro cutscene. However their are five lights instead of four and it may simply be a reference to the way Zelda called upon the Light Spirits to obtain the Bow of Light and Light Arrows (which her Rapier can transform into and fire) in Twilight Princess .

Retrieved from "https://zelda.fandom.com/wiki/Light_Spirits?oldid=539821"
Community content is available under CC-BY-SA unless otherwise noted.