This article is about the Dungeon in The Legend of Zelda. For other uses, see Level 8 (Disambiguation).'' 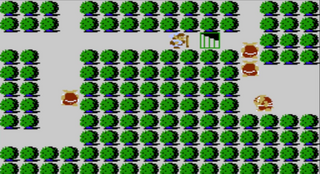 The entrance to the Labyrinth in the First Quest

Level 8 guide
at StrategyWiki
BS The Legend of Zelda

Level 8 guide
at StrategyWiki
Level 8,[1] also stylized as Level-8,(TLoZ)[2] and known as Lion,[1] is the eighth Labyrinth in The Legend of Zelda.

In the First Quest, the Labyrinth is located under a lone bush that blocks Link's path in the forest to the southeast. Link must burn the bush with Fire to reveal the staircase that leads inside.

In the Second Quest, the Labyrinth is located west of the desert, accessible only by Bombing a part of the northern wall and then crossing the river with the Stepladder.

This is the first of two Labyrinths that are colored white. Level-8 is populated by Darknuts. Like in Level 1, two main items can be obtained here. One of the Items is the Book of Magic, which gives the Magic Rod the additional property of creating Fire after being shot. The other Item is the Magical Key, which is a master key that can open an infinite amount of locked doors. Link will no longer need to collect Keys after obtaining it. Interestingly, the labyrinth is relatively close to Level 2, but there are no clues on where it actually is, so it is up to Link to discover it. The Boss is a four-headed Gleeok, which protects the final Triforce Fragment.

In the Second Quest, this Labyrinth structurally resembles a vortex similar to the spiral from the Second Quest's Level 7. However, it is larger and positioned differently. Like the First Quest's Level-7, this Labyrinth is colored green. The main items of the Labyrinth are the Magic Rod, which gives a use to the Book of Magic found in Level 4, and the Magical Key. There is an Old Man in the Labyrinth who will increase Link's Bomb capacity for 100 Rupees, allowing Link to carry four more Bombs. The Labyrinth also contains a hungry Goriya who will not allow Link to pass through to the next room until he is given Food. Many Dodongos appear throughout the Labyrinth and the Boss that guards the final Triforce Fragment is a group of three Dodongos.