It has been suggested that this article or section be merged with Level 7. 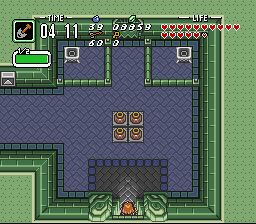 The entrance room of Level 7

Level 7 guide
at StrategyWiki
Level 7 is the seventh dungeon in Ancient Stone Tablets.

Level 7 is located under a grave in the Graveyard east of the Sanctuary. In order to move the grave, the Hero of Light must bash it using the Pegasus Shoes.

The dungeon features several rooms covered with ice. These rooms usually have chasms, traps such as Floor Spikes and Medusas, or enemies such as Hardhat Beetles, used to damage the Hero of Light alongside the slippery floor. Many walls can be blown with Bombs, revealing hidden rooms filled with Treasure Chests containing Rupees. A Thief can also be found selling a Bomb upgrade for 200 Rupees. Kholdstare, the dungeon's boss, is covered in ice that must be melt with the Fire Rod. Once defeated, it drops a Heart Container, followed by a Stone Tablet.