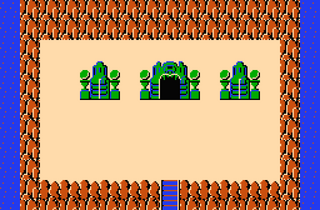 The Legend of Zelda
Stepladder

BS The Legend of Zelda
Darknuts[how many?]

The Legend of Zelda
Gleeok

Level 4 guide
at StrategyWiki
BS The Legend of Zelda

Level 4 guide
at StrategyWiki
Level 4,(TLoZ | LCT)[1][2] also stylized as Level-4,(TLoZ | BSTLoZ)[3][name reference needed] and known as Snake,(TLoZ)[1] is a recurring Dungeon in The Legend of Zelda series.

In the First Quest, its entrance is located within the lake area of central Hyrule. The Raft, which is obtained in Level 3, is required to reach this Labyrinth's entrance.

In the Second Quest, the entrance to Level-4 is a hidden stairway on the mountain maze in northeast Hyrule. It is located under a stone which requires the use of the Power Bracelet to be moved.

As the title of the Labyrinth suggests, its Map resembles the shape of a snake. The interior of this Labyrinth appears to be made of stone bricks, like most Labyrinths in The Legend of Zelda, with its primary color being dark yellow. This Labyrinth introduces dark rooms that Link cannot see in without Fire. To create Fire and illuminate the room, Link must either use a Candle or a Magical Rod in combination with the Book of Magic. It also introduces two enemies, the Vire and the Like Like. The main item of this Labyrinth in First Quest is the Stepladder. Unlike most Labyrinths in The Legend of Zelda, the Stepladder is needed to progress further within the same Labyrinth it is obtained in. Level-4 is also the first Labyrinth in the First Quest to have a mini-boss, which is Manhandla. The main Boss is Gleeok, who guards one of the Triforce Shards. This Dungeon has less Keys than needed to unlock all of the doors in the Dungeon, as there are four Keys and five locked doors. Link can unlock all of the doors by obtaining one of the extra Keys in Level 2 or Level 3 or by purchasing a Key from a Shop.

In the Second Quest, the walls and floors of the Labyrinth are green, being similar in color to the First Quest's Level 3 and Level 5. The main item of this Labyrinth are the Raft and the Book of Magic. Link does not need the Book of Magic in order to collect all of the Triforce Shards. This is the first Labyrinth in the Second Quest in which colored Bubbles appear, with the red ones being able to prevent Link from using his sword indefinitely until he touches a Blue Bubble. This is also the first Labyrinth in the Second Quest to include an Old Man who requires Link to pay 50 Rupees or give up one of his Heart Containers in order to progress further. If Link gives up a Heart Container, there is no way to get it back. There is also an Old Man in this Labyrinth who will increase Link's Bomb capacity for 100 Rupees. This Labyrinth has more mini-bosses than previous Labyrinths in the Second Quest. It contains a room with a Digdogger, a room with an Aquamentus, a room with a single Dodongo and another room with three Dodongos. Another Digdogger also appears as the main Boss, who guards the Labyrinth's Triforce Shard. There are additional rooms to the right of the room with the Triforce Shard, with the Raft located at the end of these rooms. If Link takes the Triforce Shard before exploring these rooms, he will be warped to the Overworld. However, he will need to navigate the Labyrinth again to collect the Raft because it is required to access Level 5.

Level 4's entrance is in the same location as the original Level 4 in The Legend of Zelda. It is located on an island accessible only with the Raft.

Moldorms make their first appearance in Level 4, along with Like Likes and Pols Voices. The Ocarina, which replaces the Flute from the original The Legend of Zelda, is found in a staircase room (which originally contained the Stepladder). There is also a bomb upgrade granted by an Old Man that allows the Mascot to carry 12 Bombs. At the end of Level 4 is Digdogger, who guards a piece of the Triforce of Wisdom and a Heart Container. Completing the Dungeon also eliminates the tornadoes in the Lost Woods, enabling the hero to obtain the White Sword.

The layout of Level 4 forms an "I", following the Dungeon pattern that spells out "St. GIGA".