It has been suggested that this article or section be merged with Level 1. 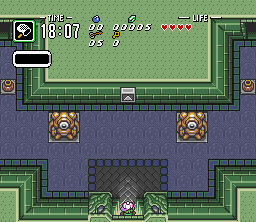 The entrance room of Level 1

Level 1 guide
at StrategyWiki
Level 1, also known as the Eastern Palace, is the first dungeon in Ancient Stone Tablets.

Level 1 is located in the eastern portion of Kingdom of Hyrule, just east of Sahasrahla's hideout.

The palace features several rooms where enemies such as Popo and Eyegores must be defeated in order to open the door to the next room. Many walls can be blown with Bombs, revealing hidden rooms filled with Treasure Chests containing Rupees. A Thief can also be found selling an Arrow upgrade for 50 Rupees. Several main items can be found inside the palace, such as the LV1 Sword, Small Shield, and the Bow, which must be used to easily defeat Eyegores and the palace's boss, Armos Knight. Once defeated, the boss drops a Heart Container, followed by a Stone Tablet.