Zelda Wiki
Register
Don't have an account?
Sign In
Advertisement
in: Dungeons, Levels, Dungeons in The Legend of Zelda,
and 2 more
English

This article is about the recurring Dungeon. For similar subjects, see Level 1 (Disambiguation). 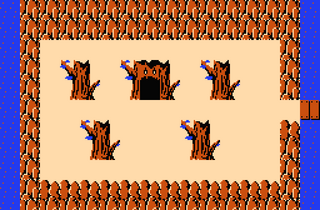 The Dungeon entrance in The Legend of Zelda

The Legend of Zelda
Four Swords

The Legend of Zelda
Bow

Level 1 guide
at StrategyWiki
BS The Legend of Zelda

Level 1 guide
at StrategyWiki
Level 1,(TLoZ | BSTLoZ | LCT)[1][2][name reference needed] also known as Level-1,(TLoZ)[3] and Eagle,(TLoZ)[1] is a recurring Dungeon in The Legend of Zelda series.

In both quests, Level 1 is located on an island in the middle of a lake. Link can get to the Dungeon by crossing the bridge to the island and does not need any Items to get there. Link must enter the mouth of the dead tree on the island to enter Level 1.

In the First Quest, Level 1 appears in the shape of a bird, with the tip of its right wing being the room containing the Triforce Shard. Like all Dungeons in The Legend of Zelda, the interior of this Dungeon appears to be made of stone bricks. Its walls and flooring are teal in color. The main items of Level 1 are the Boomerang, guarded by a room full of Red Goriyas, and the Bow. The Bow will not come equipped with Arrows, forcing Link to purchase some from one of the Shops in the Overworld. The Boss of Level 1 is Aquamentus, a green Dragon who guards one of the Triforce Shards.

Level 1 appears in the Realm of Memories as a part of the Four Swords Anniversary Edition.

The Dungeon's entrance is identical to that of the first Labyrinth in The Legend of Zelda.

The Dungeon's layout forms an "S". The Bow is in an underground room within the Dungeon. The Dungeon is infested with Gels, Goriyas, and Keese. Aquamentus guards the Triforce Fragment and a Heart Container.

In the The Legend of Zelda comics by Valiant Comics, Princess Zelda enters the Eagle Labyrinth to practice fighting in Ganon's Underworld.[4] Link reminds her that if she needs help at one point, she can just blow the Magic Whistle and he will be there to assist her.[5] The princess heads in, confident in that nothing could go wrong with all of the lessons Link has taught her.[6] After Zelda vanishes into the Underworld, a Wizzrobe commands several of Ganon's minions to tie Link up so that he can teleport both of them into the final room of the Labyrinth, revealing to Link that he filled the Eagle Labyrinth with the most dangerous of enemies so that Zelda may not stand a chance up against them.[7]

Meanwhile, just as Zelda is telling herself that she will not call for Link's help at the first sign of danger, a Gohma appears behind her.[8] Surprised that a Gohma has appeared in such an early level,[9] the princess tries to fire a Sword Beam at the foe's eye, but she is pushed back by the force of the beam, blaming Link for not having told her about the "kick."[10] She is successful in defeating a group of incoming Patras, although she admits to herself that the current situation is too tough for her and decides to call Link by blowing the Magic Whistle.[11] When Link does not appear, Zelda realizes that something must have happened and tries to stay calm since she can still get out by remembering everything that the young hero taught her.[12] The princess then reaches for her magic pouch and gets out a bomb, recalling Link's advice in that she can find an exit by blowing up one of room's walls.[13] The opening reveals even more of Ganon's minions,[14] but still the princess manages to get into the next room since the foes are busy fighting amongst themselves.[15] Zelda then prepares another bomb since she hears someone approaching her,[16] which just turns out to be Miff.[17]

Before Miff can say anything else, she warns Zelda about the Dodongo behind her, allowing Zelda to defeat it with her last bomb.[18] Miff realizes that the princess is hurt,[19] and as the fairy heals her wounds, the princess explains to her the recent strange events.[20] Astonished, Miff explains that Zelda cannot hope to fight through the Underworld's Labyrinths using Link's way since she considers that the young hero only survives because of his "dumb luck and brute force."[21] Zelda realizes this and wishes she had a bow with her since she is unable to fire a sword beam correctly.[22]

Soon after, Miff and Zelda stumble into the treasure of the Eagle Labyrinth, a magic bow,[23] which allows the princess to defeat the Gohma with a single shot and make her way into the final chamber of the maze.[24] With her bow in hand, Zelda eventually defeats the Wizzrobe and rescues Link in the process.[25]