For other uses, see Letter (Disambiguation). 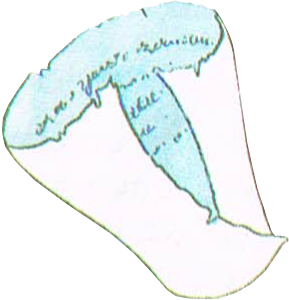 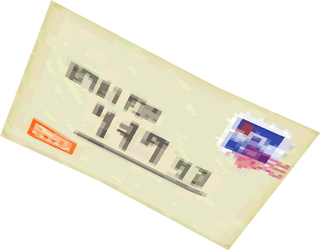 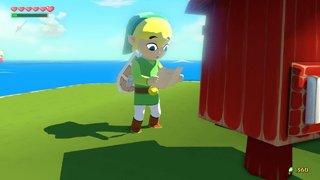 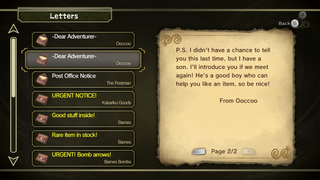 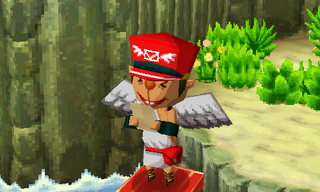 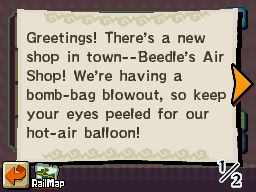 Communicate with Link or others
Letters are recurring items and objects in The Legend of Zelda series.[1][note 1] They are the most common means of long-distance communication between characters.

Letters are most often sent via Mail Delivery and delivered by the Postman. Link is occasionally tasked with mailing Letters to a Postbox. Sometimes he personally Delivers certain Letters. Letters to be mailed or hand-delivered go in the Inventory. In many games, various characters mail Letters to Link, sometimes enclosing items for him. In some games the Letters are kept on the Collection Screen (specifically the Letters submenu) and can be read any time. In other games the Letters are discarded after being read.

In The Legend of Zelda, Link can receive the Letter from an Old Man in a northeast cave of Hyrule. When Link shows the Letter to any Old Woman, they will sell him Blue and Red Waters of Life. The Letter reads:[3]

Main articles: Letter in a Bottle and Zelda's Letter

In Ocarina of Time, a Letter in a Bottle can be found in Lake Hylia. It is a Letter from Princess Ruto that must be delivered to King Zora in order to gain access to Zora's Fountain.

Zelda's Letter is given by Zelda to verify Links work is for the Royal Family. Showing this to the the Hyrulean Soldier at the Kakariko Villages entrance to Death Mountain will open the gate. After showing the letter the Happy Mask side quest will begin.

Main articles: Letter to Kafei and Special Delivery to Mama

At the beginning of the First Day, Kafei mails a letter to Anju. The Postman refuses to tell Anju which Postbox he collected it from. Later on in the Anju's Anguish Event, Link mails Anju's Letter to Kafei.

In The Wind Waker, Link obtains four Letters for Delivery. The first is Father's Letter to Komali. Afterward, Link can mail the Note to Mom for Baito. He can do the same for Maggie with Maggie's Letter. He also delivers the reply—Moblin's Letter—back to Maggie as her father will not allow Ilari to deliver it.[6] All of these Letters are stored in the Delivery Bag in the Inventory.

Link himself receives Letters from other characters through the wiggling Postboxes of the Island Postal Service. The Letters always enclose an item, either Rupees, Charts, or Pieces of Heart. Once read, the Letter is discarded and Link obtains the item that came with it.

The Mail Center Minigame has Link sorting letters for the Island Postal Service. His pay depends on the number of letters he can sort within the time limit.

In Four Swords Adventures, Sweetie gives Link a Letter for her boyfriend, meant to repair their relationship.[7] If Link successfully brings the Letter to him in the Village of the Blue Maiden, he will be rewarded with Roc's Feather.[8]

In The Minish Cap, Hyrule Town has a Post Office and a Postman but Link himself neither receives nor sends letters in the mail—the Postbox on the roof of the Post Office purely decorative. He can, however, buy issues of the Swordsman Newsletter from Marcy at the Post Office.

Swiftblade occasionally receives letters from readers of the Swordsman Newsletter.[9][10][11] After Link obtains the Kinstone Bag but before he attempts to see Librari, Julietta spends her time writing a letter,[12] likely to her lover Romio.

In Twilight Princess, the Postman delivers up to 16 Letters to Link. They are stored and viewed on the Letters screen. Link himself cannot mail anything—the game lacks Postboxes.

In Phantom Hourglass, when Link approaches a wiggling Mailbox, the Postman flies into view. He opens Link's Letters and reads them aloud, rather than give them to Link.[13] He accidentally reads out Jolene's Letter to her sister Joanne,[14] thinking it was addressed to Link. He then asks Link to Deliver it for him.[15]

Fuzo sends a Letter after any four new Big Plays are earned in Battle Mode, informing Link of his prize.[citation needed]

In Spirit Tracks, the Postman no longer reads Letters to Link, as there are new policies in place that prevent him from doing so.[16] They are stored and read from the Collection screen.[17]

Link can receive up to 20 Letters, 3 of which are sent by the Battle Commission after achieving certain Battle Ranks. All but three Letters are delivered by the Postman. Princess Zelda secretly hand-delivers hers to Link during the Royal Engineer ceremony.[18] Linebeck III gives Link Linebeck's Letter, which was written by the original Linebeck.[19] Carben wrote Carben's Letter to himself as a reminder,[20] but gives it to Ocean Floor, but gives it to Link to help him get down to the Ocean Floor.[21] These three Letters all provide information about how to progress on the game.

Some Letters enclose useful Maps to important locations or hidden Treasure Chests.[22] Ferrus encloses a Map or Picture that serves as a clue to his location, so that Link can come pick him up in the Spirit Train.[23]