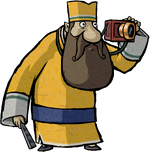 Lenzo's Research Assistant is a sidequest in The Wind Waker, and the precursor to the Nintendo Gallery sidequest (also found in this game). It starts in Windfall Island: When Lenzo finds Link in his house for the first time, he doesn't show any trust in him, since his Picto Box was stolen by a thief who had escaped the jail previously; but when Link retrieves it, Lenzo not only thanks him, but also lets him keep the Picto Box and, additionally, shows him his repertoire of pictographs. In a later encounter, Lenzo has Link complete certain objectives. This sidequest ultimately leads to Link obtaining the Deluxe Picto Box.

Exercise One – A Love Letter

Links' first task revolves around a man who sends love letters to an unknown person, only to find that none of his feelings are reciprocated. Link stakes out the Postbox, remains out of sight, and waits for Garrickson to deliver his love letter. He then takes the pictograph and brings it to Lenzo for the next challenge.

Exercise Two – The Face of Fear

Links' second task revolves around a man who fails to face his own fears. Link must scare Gossack, the man sitting at the table at the Cafe Bar who is afraid of earthquakes, by hitting a wall with a Roll Attack or knocking dishes off of the table, and snap a picture while the man is trembling. Link can then bring the pictograph to Lenzo for the next challenge.

Links' third and final task revolves about a gentleman and a lady: Both are in love with each other, yet are unaware that their feelings are requited. Link waits for Anton, the man strolling through town, to look at Linda as he's passing by, the woman in the orange dress near the School of Joy. He snaps a picture showing them together and brings the picture to Lenzo. The reward from Lenzo is 20 Rupees, but if Link chooses to help the couple further, they will reward him with a Piece of Heart.

Lenzo's last task for Link is to bring him a Forest Firefly from Forest Haven. The luminiscent insect can be found a few meters away from Hollo's Forest Potion Shop, but Link will need an empty Bottle to take it with him.

In The Wind Waker HD, Lenzo does not need the Forest Firefly to create the Deluxe Picto Box, and will accept Link as his apprentice after the third exercise. He will not mention anything about the Forest Firefly, but will accept the Firefly if Link shows him one, giving him a Joy Pendant in return.

The reward for all of this trouble is the Deluxe Picto Box, capable of taking Pictographs with color, unlocking the Color Pictography Quests and the Nintendo Gallery sidequests. Additionally, after Link clears the Forsaken Fortress, he can purchase Legendary Pictographs from Lenzo, so that they can be turned into figurines, as part of the Nintendo Gallery completion.