Zelda Wiki
Register
Don't have an account?
Sign In
Advertisement
in: Items, Objects, Items in Ocarina of Time,
and 9 more 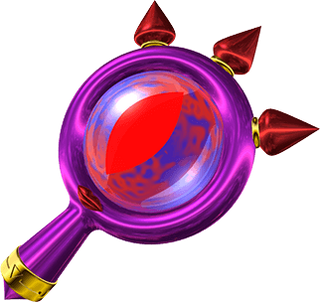 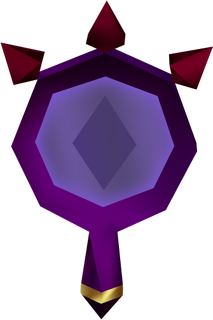 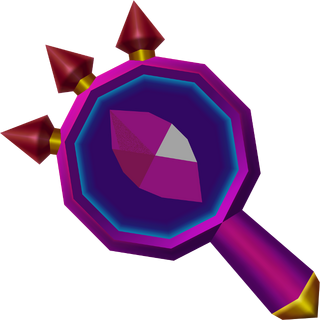 In Ocarina of Time, the Lens of Truth is found at the Bottom of the Well,[4] where Dead Hand guards it. Link first hears about it when Professor Shikashi in Kakariko Village tells him about a man who could see the truth and whose house stood where the well is now.[5]

The Lens of Truth allows Link to see things that are not normally visible to the naked eye. It can show fake walls and floors, and invisible objects and enemies. It drains the Magic Meter when used.[6] The Lens can also be used to see the contents of Treasure Chests in the Treasure Chest Game.

Despite its usefulness, the Lens of Truth is not required to complete the game. Any of the puzzles and traps based around it can be solved through luck or trial-and-error.

In Majora's Mask, the Lens of Truth can be found in the Lone Peak Shrine, a cave east of the Goron Village in Snowhead. The cave can be reached by jumping across invisible platforms, which are revealed by Kaepora Gaebora's feathers.[7] The Lens functions the same way as in Ocarina of Time, but can now be used to see the souls of deceased characters, such as Darmani III,[8] as well as characters that are totally unnoticeable, such as Shiro.[9]

The Lens of Truth is a relic that allows the wielder to dispel illusions in Hyrule Warriors.[10] It was left in The Water Temple by the Hero of Time.[11]

When Impa suspects that the person commanding the Dark Forces during the Era of the Hero of Time is not truly Princess Zelda as she claims, she urges her soldiers to ignore the fake princess's commands to cease their attack. Princess Ruto suggests they use the Lens of Truth, located somewhere in the Water Temple, to prove the alleged Zelda is an impostor.[11] While the Hyrulean Forces encircle the temple, the Zora Princess sneaks into the temple to search for the relic.[12] Ruto easily infiltrates the temple and finds the Lens of Truth, but before she can rejoin with her allies, the fake Zelda closes the Central Hall and traps her.[13][14] Frantic, Ruto instructs the Hyrulean Forces to open the floodgates inside the temple in order to reach the Gatekeeper holding the doors.[15] Pulling the two floodgate switches found in the temple's southeast and southwest rooms causes the moat surrounding the central chamber to recede, allowing the Hyrulean Forces to slay the Gatekeeper and free the Princess, who hands the Lens of Truth to Sheik before retreating the battlefield. Sheik uses the newly-acquired relic to reveal the hidden chamber, housing the Gate of Souls, from which the impostor is issuing her commands, and the Hyrulean Forces quickly engage her in combat.[10] After wearing down the impostor's stamina, Sheik uses the Lens of Truth to reveal their true identity: Wizzro.[16][17]

In Adventure Mode, the Lens of Truth is used as the selector icon for tiles that have not yet been unlocked.